You can help get pet theft reform on the political agenda.

Write to, or email, your local MP: The Pet Theft debate continues!

This template letter is asking for your MP to support #PetTheftReform to protect our pets.

It’s really easy to write to or email your MP and your help will go a long way: here’s what to do:-
To find your MP, enter your postcode and hit next to find their constituents address and email address.

Dear ____MP,
Firstly I would like to thank you for your support as the Government have announced plans to bring forward a new criminal offence for pet abduction in the Kept Animals Bill: https://www.gov.uk/government/news/new-offence-to-tackle-dog-theft-moves-step-closer

In the Government’s press release it says “ The dog abduction offence,  announced in September by Defra, will be added by the Government to the Kept Animals Bill, bolstering the raft of measures it already includes to further protect pets, livestock and kept wild animals.

Prior to this new offence, pet theft was treated as a loss of property to the owner. This new offence will take into account the emotional distress caused to both the owner and the dog and will help judges’ ability to hand down more targeted penalties and sentences for pet thieves. A provision will also be made in the Bill to extend the offence to other pets in the future, should evidence support this”.

I also hope that I can rely on your support on Compulsory Microchip checking. With reference to the #FernsLaw campaign and petition to “Make it compulsory to check microchip registration to reunite sold on stolen dogs and cats”,  which was debated in Parliament on the 28th June 2021: https://petition.parliament.uk/petitions/300010

Defra are reviewing the need to make checking microchips a legal obligation to support the compulsory microchipping regulations. The update from the Government on the Cat and Dog Scanning and Microchipping consultation was very positive: https://www.gov.uk/government/consultations/cat-and-dog-microchipping-and-scanning-in-england/outcome/summary-of-responses-and-government-response 99% (10,749) of responses agreed that it should be compulsory for vets to scan cats and dogs upon first presentation. 83% (8,987) considered that a legal obligation should be imposed to ensure that cats and dogs are scanned at first presentation.  I have microchipped my dog with the expectation to be reunited should they be lost or stolen and feel extremely let down by the loophole created by the Royal College of Veterinary Surgeons (RCVS) and British Veterinary Association (BVA) and their best practice recommendations.

I look forward to your response.
Kind regards,

Feel free to use the template letter including your own feelings and/or experience of your missing or stolen dog, cat, horse or any other pet and include a poster.

MPs are far more likely to reply if they receive personal correspondence from you and don’t forget to ask family, friends and neighbours to write in, as the more letters they receive on one topic pushes the issue to the top of the pile.

Please support #PetTheftReform [@MPname] as my MP, please join @sampauk_ @Dr_Dan_1 in this fact based campaign to protect our dogs and cats 🐾 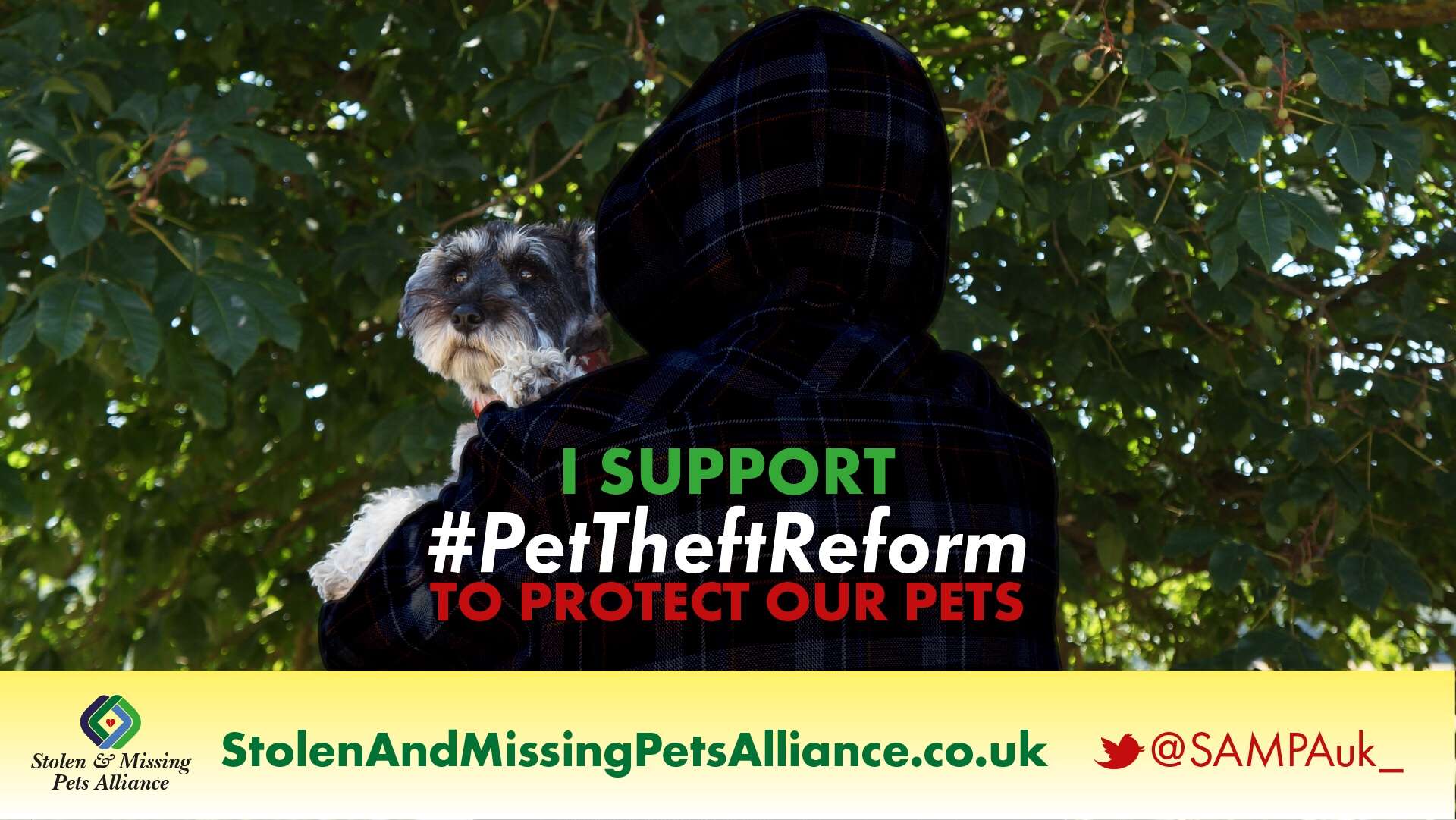 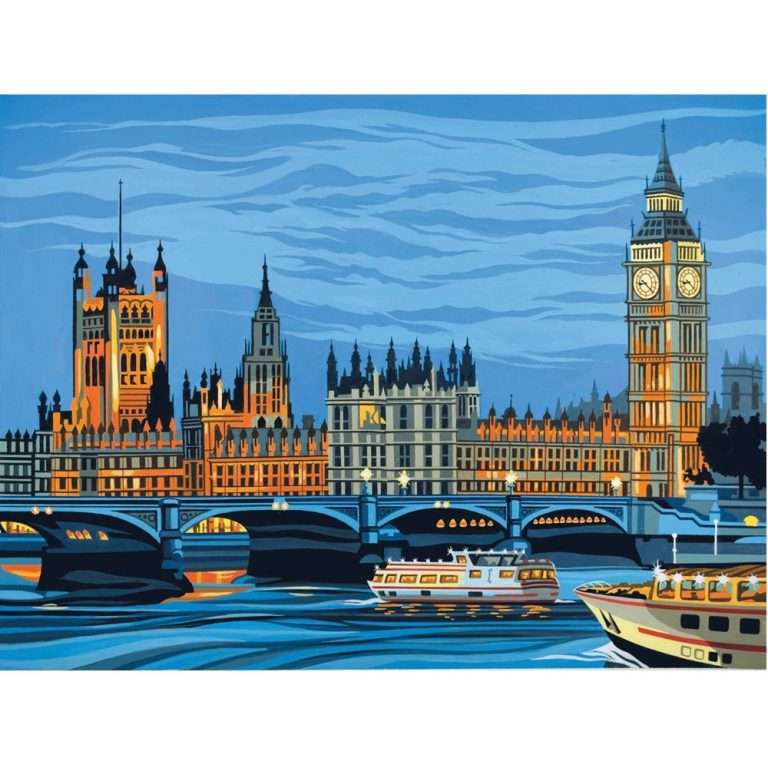 MP's are replying with a standard copy and paste email: 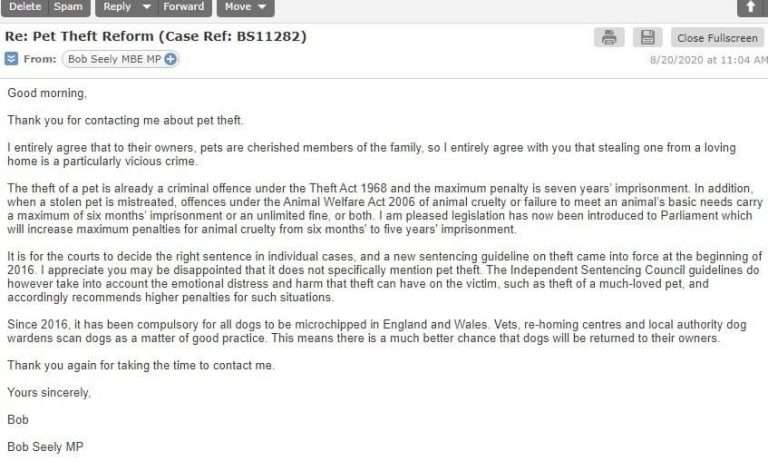 Response to the response:-

As promised here is a template that you can use to respond to the response that you have received from your MP. You are more than welcome to personalise it to suit your case.

Thank you for your response

I accept that the theft of a pet is already a criminal offence under Theft Act 1968 and the maximum penalty is seven years imprisonment but the fact is that this is totally misleading as in the debate in July, 2018, the Rt Hon George Eustice, the then Minister for Agriculture, Fisheries and Food said “ applying our interpretation of the most recent guidance, a seven-year maximum penalty is largely theoretical for pet theft unless there are other aggravating circumstances.”

In the same debate the Minister said “Our reading of the current guidance, which was issued in 2016, is that in applying that guidance, the theft of a pet should be considered as either a category two or a category three offence. The custodial sentence is two years for a category two offence and one year for a category three.” Because the financial worth of most pets including dogs is less than £500 then most thefts will fall into category three and with mitigation, this ends up as no more than a slap on the wrist. The worth of a domesticated sentient being should not be based on a financial one so allowing the courts to impose greater sentences.

Since the introduction of Theft Act 1968 much has changed including the lifestyle of pets and their relationship with us humans yet the law bundles it in with laptops, etc while still continuing to separately classify bicycles and motor vehicles.

In the latest Zoom Conference in July held by the Petitions Committee following the petition in 2019, Mr John Cooper, QC said “It’s not a particularly revolutionary thought or proposal to say that the Theft Act should be amended to specifically refer to theft of a pet. And by doing that, it gives it a unique category upon which the Courts then can bite, for want of a better expression, and sentence, so that the theft of a pet, which is far more significant potentially than many other aspects of theft so that it’s a wholly unique category which enables the court to focus closely upon the sentencing parameter rather than it being morphed as it presently is.”

I would ask that you take a few moments of your precious time to read the transcript of that conference: https://committees.parliament.uk/publications/1511/documents/13808/default/?fbclid=IwAR04f63YEu8vCce1ye9VQejcn5-hJEvJRIBrJtrhWtDfWxUdTrP405Y2IZc

With the new legislation on breeding and the escalating prices of puppies together with lockdown, dog theft is on the increase and there is never a better moment for the law to be amended and for this I ask that you reconsider your support and help to prevent further misery and heartache.

Regarding your point about microchipping unfortunately due to the inability of the numerous databases to work together and the lack of compulsory scanning the much need reunifications are not taking place and the need for change is demonstrated by the FernsLaw petition.

I thank you for your time and look forward to a positive response.

SAMPA set out two routes to reform, amending the Theft Act is the preferred and easiest option:-

One is to revise sentencing guidelines in the Theft Act 1968 to ‘reclassify the theft of a pet to a specific crime in its own right’, including a simple ‘domestic pet’ definition.

The second route is to ‘amend animal welfare law to make pet theft a specific offence’ through the Animal Welfare Act 2006. This would ensure courts consider the fear, alarm or distress to sentient animals rather than their monetary value.

Dog theft on the rise: how in danger is your pet and what can be done about it?:
https://theconversation.com/dog-theft-on-the-rise-how-in-danger-is-your-pet-and-what-can-be-done-about-it-125010

Compulsory cat microchipping is great in theory – but the system is flawed:
https://reaction.life/compulsory-cat-microchipping-is-great-in-theory-but-the-system-is-flawed/

Time for some MYTH BUSTING!

UK Government – ‘The theft of a pet is already a criminal offence under the Theft Act 1968 and the maximum penalty is seven years’ imprisonment and so there is no need to introduce a separate offence.’

Pet Theft Reform – Only Crown Court can deliver sentences in excess of 6 months. For a case of theft to be heard before the Crown Court, the cases are either a) secondary offences, so tagged on to Burglary; b) repeat offenders or c) major offences of a value over £100,000. This is where the assumed monetary value of the pet becomes relevant.