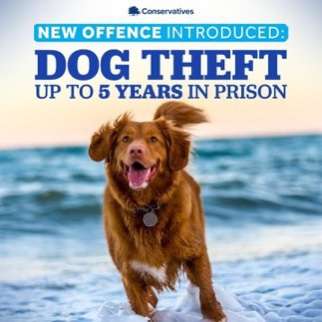 A new criminal offence to crack down on dog theft and put people who steal these much loved pets behind bars for up to five years has been set out in the Government’s Kept Animals Bill today.

The dog abduction offence, announced in September by Defra, will be added by the Government to the Kept Animals Bill, bolstering the raft of measures it already includes to further protect pets, livestock and kept wild animals.

Prior to this new offence, pet theft was treated as a loss of property to the owner. This new offence will take into account the emotional distress caused to both the owner and the dog and will help judges’ ability to hand down more targeted penalties and sentences for pet thieves. A provision will also be made in the Bill to extend the offence to other pets in the future, should evidence support this.

By introducing this offence, the Government is following the recommendation of the Pet Theft Taskforce, launched in May 2021 to tackle a reported rise in pet thefts during the pandemic. Evidence shows that more than 2,000 incidents of pet theft were reported to the police last year, causing considerable distress for owners and their pets alike. For crimes recorded by police in which animals are stolen, around seven in 10 involve dogs.

The loss of a much-loved pet causes unique distress. I am pleased that we are legislating to recognise this specific crime.

The new dog abduction offence will reflect the impact on animals in penalties for criminals, and deliver justice for victims.

The recognition of the distress caused to animals by pet theft is an important step forward, treating them as sentient beings rather than merely property.

The new offence should build greater awareness of the significant impacts of dog theft on people and animals, and reassure pet owners that these crimes are being taken seriously.

David Bowles, Head of Public Affairs at the RSPCA, said:

The theft of a pet is devastating and we’re pleased the Government has announced these amendments which we hope will act as a real deterrent to those who carry out this crime. While the current proposed law applies to dogs, we are really pleased to see the Government has also recognised how much other animals mean to people as well, and put in provision to extend it to other pets. We hope this new law, which will see sentences up to five years, will help crackdown on the heart-breaking issue of pet theft.

Having your beloved pet stolen is an extremely stressful, often heart-breaking experience. For years, Dogs Trust has called for harsher penalties to deter those who profit from this despicable crime. We wholeheartedly welcome the measures the Government has taken today to tackle pet theft and prioritise the welfare of our pets as sentient beings, and very much hope that the increased sentencing will make pet thieves think twice.

The RSPCA has warned the public about the risk of thieves stealing beloved pets. Victims of this awful crime include French bulldog, Minnie, who was found badly injured and abandoned late at night in Burnley. RSPCA officers scanned her microchip and discovered she belonged to a family who lived 170 miles away in Gloucestershire. Minnie was reported as missing back in March 2020 after being taken from her owner’s garden. She is now back at home with her family.

The police advises that dog owners should avoid leaving their pet unattended while out in public, vary their routines when walking their dogs and take basic security steps at home such as checking locks on doors and garden gates.

The new measures form part of the commitment to strengthen the UK’s position as a global leader in animal welfare standards. Since 2010, the Government has brought in mandatory microchipping for dogs to help reunite lost dogs with their owners, introduced additional protection for service animals through ‘Finn’s Law’, and introduced Lucy’s Law to tackle puppy farming by banning the commercial third-party sales of puppies and kittens.

The Kept Animals Bill can be found here.

Today’s announcement builds on the UK Government’s commitment to revolutionise the treatment of animals in the UK and introduce measures to protect the welfare of animals abroad, as set out in the Action Plan for Animal Welfare.

We as SAMPA a campaigning group were recognised in the #PeoplesPetAwards 10th December’21 with a ‘Special Recognition Award’ for the #PetTheftReform campaign. Special thanks go to Dr Daniel Allen and Doglost.co.uk who gave evidence to the Government’s Pet Theft Taskforce.

Thank you to everyone who signed the petitions and wrote to your MP, working together we got the changes needed for our dogs but must continue to get cats and other kept pets included, in line with the new #PetAbduction offence.

I was very proud to have been invited to represent our SAMPA team, all the Facebook missing dog groups and pages and all owners of dogs and cats. We dedicate this award to all the stolen pets that are still missing 💔

Co-founder’s of the Stolen And Missing Pets Alliance: Doglost.co.uk, Vets Get Scanning, Pet Theft Awareness and the Dog Union

Pet abduction in England has been a growing problem and one that causes untold pain for heartbroken owners.

Now, thanks to the work of Dr Daniel Allen and Debbie Matthews, as well as their fellow campaigners, pet abduction is about to be formally recognised as a crime.

Daniel, an animal geographer at Keele University, decided to do something to reform the outdated legislation and teamed up with campaigners from the Stolen and Missing Pets Alliance (SAMPA) including co-founder Debbie, to launch a petition to have the law changed – working hard to notch up 100,000 signatures in just four months.

In July 2021 the issue was debated for a second time in Parliament, and the government pledged to change the law to make pet abduction a crime.

Debbie has been campaigning for a pet theft law since 2014 after her own dogs were stolen back in 2006. Debbie was fortunate enough to be reunited with her two Yorkshire Terriers following a TV appeal alongside her father Sir Bruce Forsyth and they started the campaign Vets Get Scanning, to get the veterinary profession to check microchip registration at pets first veterinary treatment to reunite sold old pets. This is being considered by Defra now.

Debbie didn’t realise she was first to be interviewed on the red carpet! https://fb.watch/9PjV-F74WI/