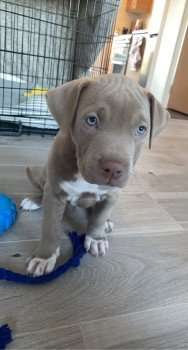 CAIRO REUNITED UPDATE: We have got Cairo he was left at the side of a road in Shettleston. Thank you everyone who shared and helped us get our boy back

We are appealing for information following the theft of a dog from in Pollok.

Officers were called to Meiklerig Court around 10pm on Wednesday, 14 April, 2021 after three men broke into a property.

One of the men threatened the homeowner with a bladed weapon before stealing a nine-week-old American Bulldog puppy.

Nobody was injured as a result of the incident.

The suspects are described as three men, tall and all with muscular builds. At the time of the incident they were wearing black balaclavas and dark coloured tracksuits.

After the incident, the three men headed east in the direction of Meiklerig Crescent towards Linthaugh Road carrying the puppy.

Detective Constable Christopher Sneddon, of Police Scotland’s Glasgow CID unit, said: “Thankfully nobody has been injured as a result of this incident but the owner has been left evidently shaken.

“We are appealing to anyone who may have noticed three men acting suspicious in the area to come forward and speak to officers.

“If there is anyone who has possible CCTV or dashcam footage that could assist with our enquiries, please get in touch with police.

“I would also ask if anyone is approached about buying a puppy similar to this to get in contact with police.