A pet dog was found more than 120 miles from home after being stolen from her owner’s address.

Pickles disappeared from her garden in Wisbech, Cambridgeshire, and was found as a wandering stray in Wolverhampton.

Pickles’ owner, Tony Bowden, said he “could not fathom” why someone would unchain her, drive her so far and then abandon her.

He made a nine-hour round trip to bring the Great Dane-cross-bulldog back home. Pickles was said to be “delighted”.

The six-year-old had disappeared and only her chain was found.

“It was very strange, it was like someone unhooked her, left the chain on the fence and then took her all the way to bloomin’ Wolverhampton,” Mr Bowden said. “Why would anyone do that?”

He said a friend told him there were rumours hare coursers had been in the area but Mr Bowden said he had no idea who might have taken his pet.

Pickles was picked up by a dog warden in Wolverhampton and taken to the local branch of Birmingham Dogs’ Home where she was scanned.

“They rang [last week] and I couldn’t believe it, we were over the moon,” Mr Bowden said.

“It’s absolutely amazing that we got her back and she was so delighted to see us.” 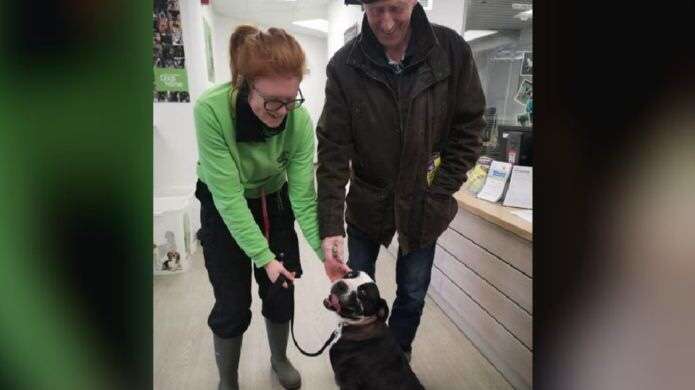