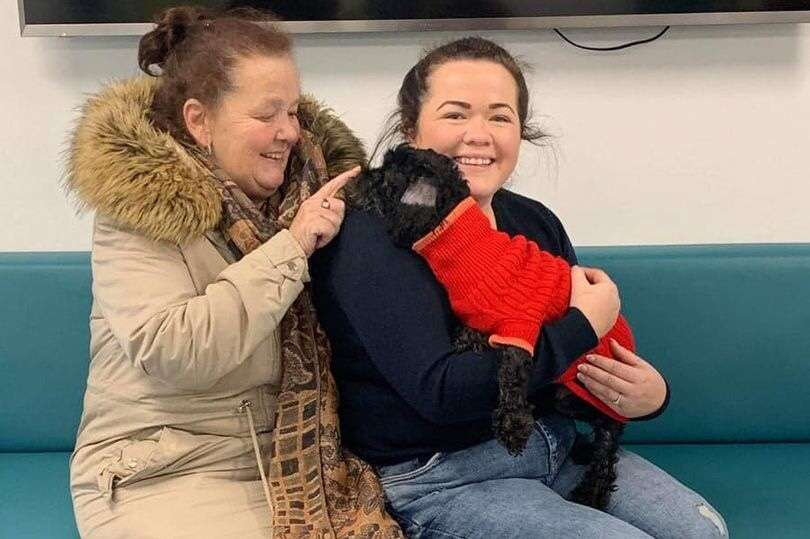 A little dog from  Shankill Road, Belfast has been found in leafy Cambridgeshire after going missing six weeks ago.

Moses, a four-year-old Poodle, is believed to have hitched a ride to Liverpool from Belfast docks.

And he ended up 500 miles away in Cambridge.

He vanished from the family garden on December 5 and searches in the city were fruitless.

But his owner Carol Hill and her daughter Joan refused to give up and at midday on Wednesday they were reunited with Moses.

Carol and Joan travelled to Liverpool last night and drove the four hours to Wood Green The Animal Charity made famous by its meet and match TV show.

Extensive searches has drawn her to their rescue page and she was convinced Moses has somehow ended up in their care.

And on Wednesday she was proved right.

A delighted and tearful Joan said: “It’s him, it’s Moses. Now we just need to get him home.”

After Moses slipped out of his garden on the Shankill he was last seen in Belfast docks on December 13.

It is thought he hopped into a container at the docks and was mistakenly transported across the Irish Sea to England.

A social media effort ensured the little black Poodle had an army of followers and his family were well supported in what initially seemed like a hopeless search.

Friend Andrew Forbes said: “This has been the most nerve-wracking time and waiting to hear from Joan today when they were finally allowed to see the black poodle was awful.

“But she messaged us fast and our page went mad with messages.

“Moses is on his way home thankfully. It just goes to show the power of social media, the people of Belfast and beyond who kept up the support and most definitely the strength of a little dog.

“Joan was convinced the dog in the photo at the rescue centre was Moses and she was right.”

Share:
← Have you seen these stolen French Bulldogs in the Toxteth area of Liverpool?
Police intervene to get stolen dog home #PetTheftReform →