Ross kindly agreed to answer some questions for us and explain more about his Private Members Pet Theft Bill:-

1. Please tell us about your own pet(s) and what they mean to you?

I have a two year old Jack Russel cross Yorkshire Terrier called Poppy. The worst part of my job as an MP is every Monday morning and having to leave her to travel down to London. The fact she knows I’m leaving and does her uptmost to make me feel guilty about it just makes heading to London so much more harder.

I could not imagine returning home to find that Poppy wasn’t there, I don’t even want to contemplate the notion of her being stolen. For me, just like the millions of pet owners across the UK, Poppy is my family. To be honest I’m like a proud Dad. She has her moments, like any teenager, but I love her to bits and I would hate it for anything to happen to her.

2.You’ve already involved yourself in other pet welfare issues. How did you first become aware that pet theft is a (rising) crime and why you decided to do something about it?

I was made aware of the growing issue of Pet Theft during the campaign I was running to ban the use and sale of electric shock dog collars. Dog owners who had suffered the distress of having their dog stolen contacted me to share their stories which were truly heart-breaking.

Looking into this issue further I discovered recent findings published by Direct Line Pet Insurance, using UK police statistics, which show an upward trend in pet thefts in recent years, with a 14% rise in 2016 and a further 6.8% increase in 2017

Last year, 61 French bulldogs were stolen – a 27% rise year on year, while Staffies remain the most targeted dog with 210 stolen in 2017.

I came to the conclusion that a change in the law could have a significant impact on these figures.

3. Pet and horse owners are often very surprised to find out that their animal family members are legally regarded as objects when it comes to theft. What changes would you like to see amended into the 1968 Theft Act?

Pet theft can cause lasting damage to a family, more so than the theft of an inanimate object of the same sort of financial value.

As Dawn Maw – who spent thousands of pounds, took an extended period of time off work, and suffered the breakdown of her marriage after her dog Angel was stolen in 2013 – has said, “losing Angel was like losing my life.”

Or consider the case of Kieran Hamilton, who was stabbed 40 times in a burglary in which his dog Rambo was stolen. According to his mother, he just wants his dog back.

Or the case of Rita and Philip Potter, whose Labrador Daisy vanished from their own back garden in Norfolk eight months ago. Rita says that Daisy was such “a beautiful dog, she was a wonderful companion. We have got seven grandchildren, and they all miss her so much. At Christmas time, our little granddaughter, who is just five years old, said all she wanted for Christmas was Daisy back home.”

As it stands, the law does not properly recognise the real harm that pet theft can cause, because pets are not inherently treated differently to inanimate objects.

In England and Wales, sentencing guidelines are based primarily around the financial value of the possession, whether it be a mobile phone, a TV, or a beloved family pet.

When Dawn Maw, who described Angel as her “best friend,” said that “my phone might have cost the same as Angel, but could have been replaced within 24 hours,” she got to the heart of the absurdity of this situation.

Victims of pet theft have not just lost a financial asset; they’ve lost a much-loved member of the family. Pet theft can be a truly devastating and distressing experience. Losing a Pet can tear the heart out of a family. And that is what the law should, but doesn’t, recognise.

4. Can you explain briefly what a Private Members’ Bill is? Can you give us a summary of your Pets (Theft) Bill proposal?

A change in the law is necessary to deliver justice for victims of pet theft, and to give more peace of mind to the 12 million UK households with a pet.

This Bill will create a new, separate criminal offence in its own right of pet theft, recognising the self-evident fact that the theft of a living, sentient being is in a whole different category to the theft of an inanimate object.

We are talking about the abduction of an animal, of what most pet owners would consider a central part of their family. It’s a crime that’s either more thoughtless or more malicious – or both – than the theft of an inanimate possession.

And the Bill will also require that sentencing is appropriate to the level of emotional harm caused by the theft, recognising that, for victims of pet theft, it’s the emotional loss, not the financial loss, that really matters.

After all, today a growing number of companies offer bereavement leave for employees who’ve lost a pet. If we can give due recognition to the emotional effects of the loss of a pet in other walks of life, why can’t we do a better job of it in the courts?

My intention is that this Bill effect these necessary changes across Great Britain – in England and Wales, yes, but also in Scotland.

5. Your Bill considers pet theft as an animal welfare issue. This is different crime than a theft issue?

No, but current criminal law relating theft is not adequate in recognising the significant and emotional role that our pets play in our lives compared to a mere possession.

For many people, it can be hard to truly comprehend the impact that losing a pet can have.

These animals are an integral part of the families that look after them, or indispensable companions to those who may live alone.  As things stand, the law does not recognise a pet as being any different to any other inanimate possession of the same value. But a pet is not something you can simply replace.

The first reading of my Bill went well. It was an opportunity to raise awareness of the issue of Pet Theft amongst other MPs who were able to show their support for the Bill by being present in the Chamber. I also needed to demonstrate that I had cross party support for my Bill by obtaining signatures from other MPs which I am pleased to report I found very easily.

7. What is the process now for you to further your Bill?

Having now introduced the title of my Bill the next steps are that the Bill is published as a House of Commons paper for the first time.

The next stage is second reading, which is the 25th January 2019, which is the first opportunity for MPs to debate the general principles and themes of the Bill.

8. Finally, have you met any victims of pet theft and if so has it made you more determined to amend the law?

During the course of my campaign I have met several victims of Pet Theft, I have heard the distress and upset in their voice, I have had people cry because the to this day have no idea what happened to their pet, if they are ok or if they are even still alive. I have seen and heard at first hand the devastation that pet theft causes.

It shows how clearly abhorrent the crime is. How truly wicked it is. Having heard these experiences and reflecting on how I would feel should such a horrible thing happen to me it has made me incredibly determine to bring justice to the victims and send the clearest possible message to these criminals.

Email your MP ASAP – let’s make sure the second reading of Ross Thomson‘s Pet Theft Bill doesn’t get voted out and make sure your MP knows to support it!

Ross pictured with his dog Poppy. 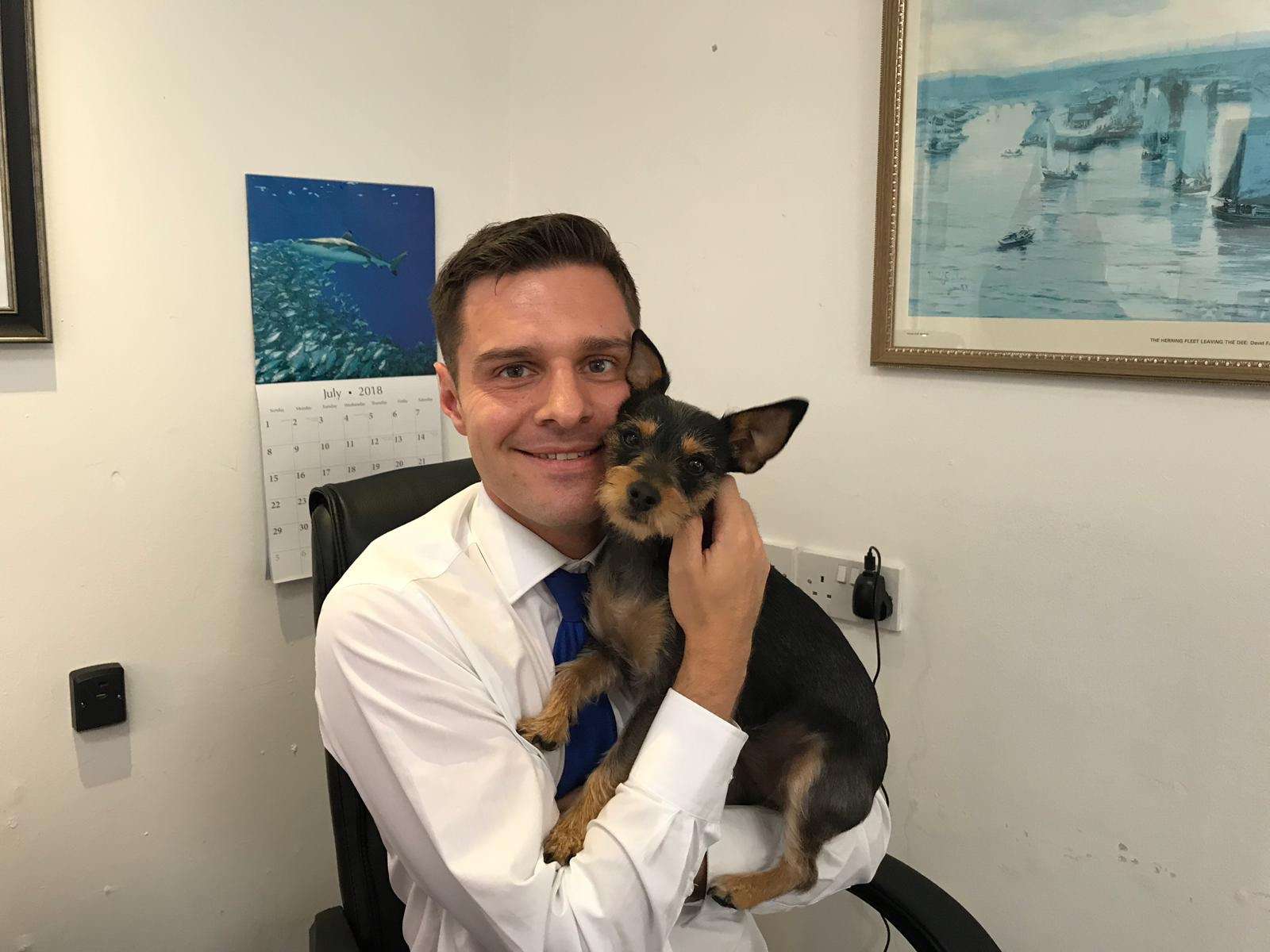