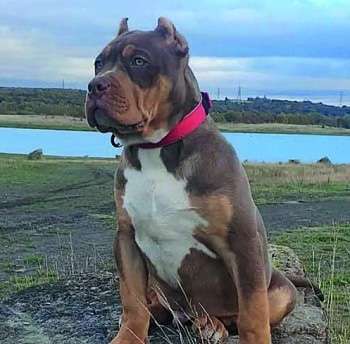 SNIPER REUNITED UPDATE:
Just want to say a big thank you to everyone that has helped share and supported us through this emotional journey. I want to thank you all on the behalf of Snipers Family and us on the Team. Sniper is ok he is being checked over to make sure he is ok and I can tell ya he is one beautiful Boy. We will update you all tomorrow and with a photo of Sniper or maybe video. Happy Tears everyone we are literally jumping for joy .Thank you all so much for all of your help love Team Sniper ❤️❤️❤️❤️❤️ 31st January 2022.

Evening everyone quick update.
Firstly apologies to the local neighbourhood that may have been disturbed whilst trying to retrieve Sniper last night.
The scum that had our boy is a local pretty well-known to.
Sniper is now safe ,although traumatised and under weight.
He has many scars over his body which leads us to believe he was sadly being taught to fight etc.
We are busy gathering all our information including a vets report to hand over to the police. Charges hopefully will be made and we are pushing for an arrest. The family are taking good care of Sniper and taking things slowly to gain his trust. The family have said through their darkest hours without their boy you gave them the hope and belief they would be holding their boy again. At this current time its not appropriate to put pictures up as he has many wounds.
Such a young boy gone through so such trauma is absolutely heartbreaking 💔.
Thank you everyone and this isn’t over justice for Sniper.
If anyone has any information it will be treated in the strictest of confidence. Please contact any of our admin or join Ivars Army anti dog fighting campaign.
The family will thank you themselves shortly.
Xxxx

Following on from previous update .
There were 2 other dogs at the premises staff’s. One we believe to be stolen? and one pregnant. Police took both as far as we are aware.
This scumbag has no mercy and certainly no respect for animals. We are so proud of Snipers family the way they held it together to bring their boy to safety whilst faced with a difficult situation. Respect to them all x

A Sheffield man has offered a ‘substantial’ reward for the safe return of his beloved dog, which he suspected was stolen from his home last month.

Foyzul Miah of Darnall said his five-month-old XL Bully dog named Sniper went missing from the back garden on December 12 at approximately 6.30am, sparking a month-long hunt across Sheffield and beyond.

The 21-year-old stated that Sniper could not have escaped on its own, and CCTV footage he obtained from the area has shown the dog being taken away by unidentified individuals.

Foyzul, who has had Sniper since the puppy was eight weeks old, has been having ‘sleepless nights and early mornings’ trying to figure out where his dog may have gone.

He said Sniper was due to visit the vet after he had hurt his leg, but now he couldn’t do so.

In an emotional Facebook post, he wrote: “My mind is going back and forth thinking about if he has eaten right and what he is doing. Fearing for Sniper’s health not knowing how he is and missing him like mad.

“I really do just want my boy back, the house feels empty without him as well as me. I really do hope he is okay and his leg has been treated.

“Money is not the issue, I’d just like to have my boy back home where he stands confident knowing he has a loving and caring family behind him.

“Just thinking about him brings tears to my eyes, I never knew anyone would snatch away my best friend.

“You should be able to turn your back and not be worried that someone will take your dog, this isn’t right and isn’t fair, this event has affected Sniper’s family so much and won’t ever be the same nor forgotten.

“I’m not going to stop till I get him back and won’t listen to the comment’s saying “it’s only a dog just buy another”, Sniper will never be replaced and is part of me.

“I’m up at hours of the night waiting for calls just in hope that one call helps me get my boy back, so we can finally be reunited and see Sniper’s smile grow back on his adorable face.

“Sniper isn’t any ordinary dog and is a very rare dog. If you do see him you will know or even if you think it’s him, please get photos and a location of where you think the person is keeping him, but if you can get Sniper, please bring him home.”

Foyzul also said that the the police should need to do more to help find his pet.

“If the police can go to the houses and get the footage of the car that came in and took the dog, we’d be able to find him,” he said.

South Yorkshire Police, when contacted, confirmed receiving a report about a stolen dog in the area.

A police spokesperson said: “The investigation has been filed pending further enquiries.

“Officers have explored all viable lines of enquiry and are now encouraging anyone with information to come forward and report to us.”