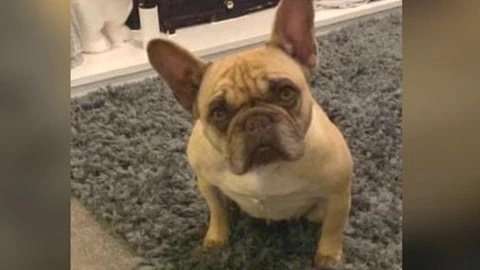 A puppy stolen from her owner’s front garden almost five years ago has finally been reunited with her family.

French bulldog Roxie, was just 18 weeks old when she was taken from outside her owner Shona Macleod’s house in March 2017.

Dog lover Shona was left distraught by the theft of her beloved pet and appealed for anyone with information to come forward.

Years passed with no news and Shona accepted she would never see her adorable dog again – until earlier this month, a council officer turned up at Shona’s front door with Roxie on a lead.

Now fully grown, she was spotted wandering alone through a local park on October 30 – her 5th birthday – and was identified through her microchip.

Mrs Macleod told BBC Cumbria: ‘I thought it was my new dog that had escaped from the garden when I saw the council worker with a dog at the door.

‘I cried my eyes out when I realised it was

‘She’s not timid, so although she hasn’t been looked after properly I don’t think she’s been badly treated.’

Roxie is now settling back into life with the family at their home in Carlisle, Cumbria.

The lovable dog loves nothing more than playing with fellow French bulldog, Bear, who Shona bought earlier this year.

In the four years and eight months since she went missing, the Macleod family has grown with two more children being added to the brood.

Shona added: ‘Bear is much bigger but quite dopey and just loves Roxie, they’re both getting on together so well.’

Shona is now urging dog owners to get their pets microchipped so that they can be reunited with their canine companions in the event of them being lost or stolen.

Microchips give the animal a unique code that can be scanned and matched to the owner’s contact details.

A Carlisle City Council spokesperson said: ‘This case shows how important it is to get your dog microchipped and also to keep the details up to date.

‘When our stray dog service found her we were able to check the microchip and get the registered details of the person who reported her stolen.’

Please remember that although it is compulsory to microchip our dogs there is a loophole in the system as the veterinary profession are not legally obliged to check microchip registration at pets first veterinary treatment, preventing sold on stolen dogs from getting home. We are campaigning to get this changed with #FernsLaw on VetsGetScanning.co.uk