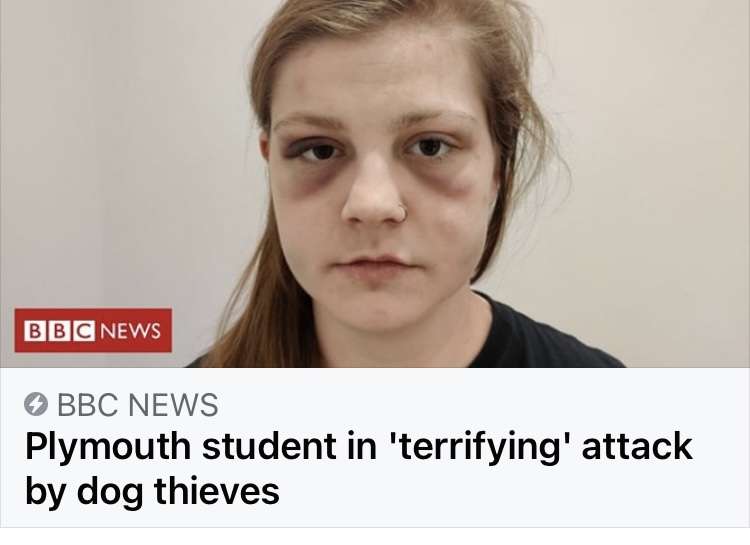 A dog owner was knocked to the ground and punched in a “terrifying” attack by two men trying to steal her pet.

Student Allie Knight, 22, was attacked near Mutley Plain, Plymouth, as she walked her pug Paddy.

It came amid a rise in thefts of dogs as a result of the pandemic, police forces around the country have reported.

She was attacked at about 22:00 GMT on Monday as she walked on a side street off Mutley Plain.

“I got shoved from behind at first, and got punched in the face once I was on the ground,” she said.

“They searched my pockets, but I didn’t have anything on me.

“Then they went for the dog but I kept hold of the leash, and I remember they kept trying to take it from me.”

Ms Knight said one of the men started to punch her in the face while the other tried to grab the leash.

“I had my motorcycle gloves on, so I gave a few punches back, grabbed my dog and tried to run, but one of them grabbed my wrist, and they both took me to the ground again and started hitting me in the face whilst I just gripped her as tightly as I could,” she said.

“I thought I heard a car coming, and both of them ran away thankfully.”

She was left very shaken up and her face was covered with bruises, along with bruises to her neck and wrist.

She urged other dog walkers to be careful: “Make sure you’re aware, or you go in pairs when you go for walkies.

“Be observant and watchful, as you never know when somebody will strike.”

Police investigating the attack said they were seeking two men and have appealed for witnesses.