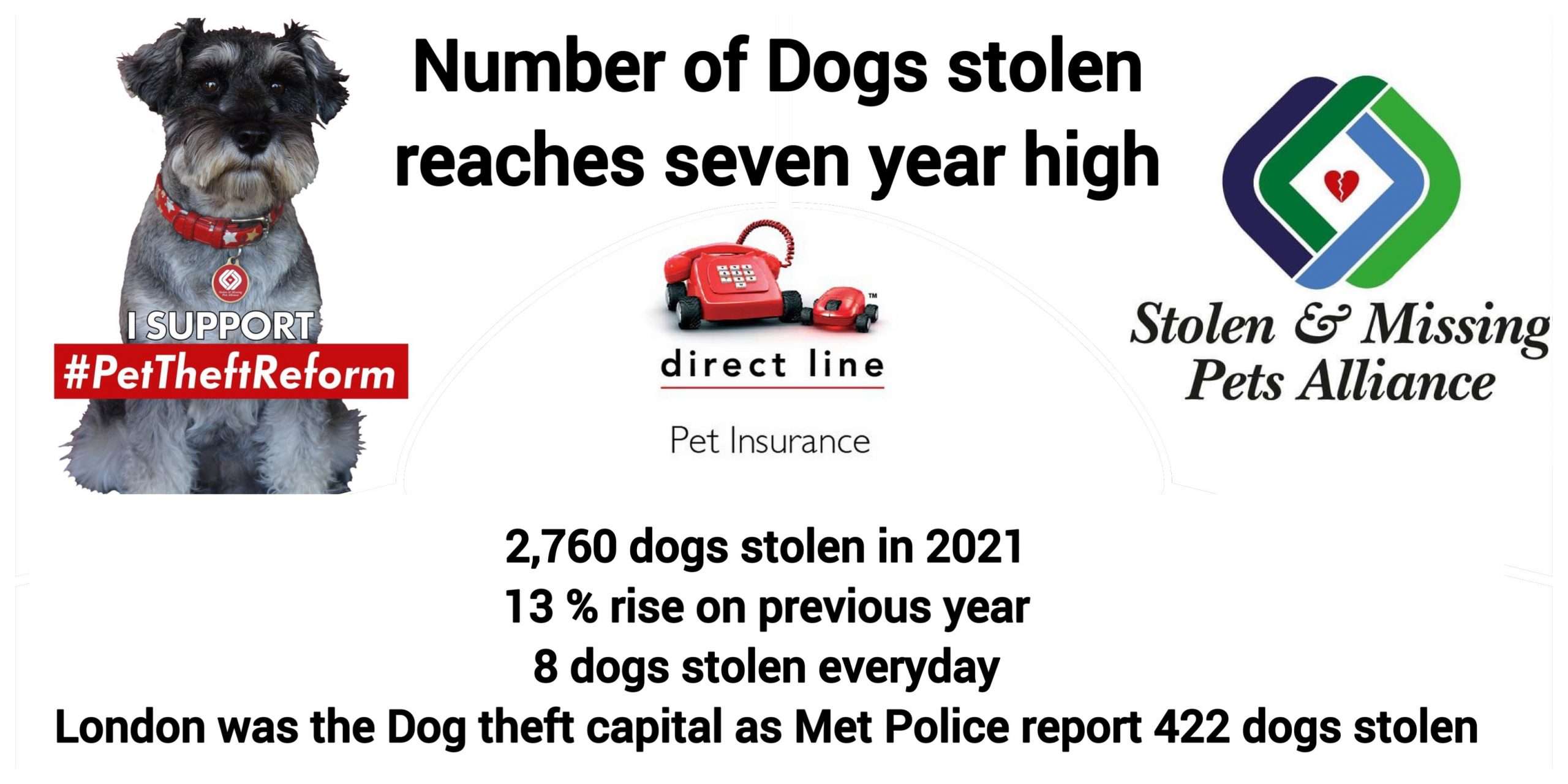 The number of dogs stolen in 2021 rose 13 per cent to a record high of 2,760, the equivalent of eight dogs stolen every day.

French Bulldogs and Jack Russell Terriers were the most targeted breeds in 2021.

London was the dog theft capital, with the Met Police reporting 422 dogs stolen, followed by West Yorkshire (199) and Kent Police (182)

With 16 million4 people now owning a dog, 3.8 million of whom took ownership during the pandemic, the opportunities for thieves are more abundant than ever. The past couple of years has also led to a rise in the cost of dogs, making them a more lucrative target for criminals. This is particularly the case for pedigrees like French Bulldogs, the dog most likely to be stolen this year, which can cost upwards of £3,000.

Staffordshire Bull Terriers, which were last year’s most popular target for thieves, saw an 88 per cent reduction in 2021 pushing them down to seventh. Crossbreeds such as Cockerpoos and Puggles have also fallen in popularity, from second in 2020 to 10th in 2021.

Madeline Pike, Veterinary Nurse for Direct Line Pet Insurance said: “It’s devastating to see the number of dogs stolen continues to increase across the country. Unfortunately, the increase in dog ownership since the pandemic began and the subsequent rise in prices of these animals seems to make the crime even more appealing to thieves. The law will soon recognise dogs as members of the family with feelings, not just owned property and we hope that this will deter criminals, especially if they can be punished more severely if prosecuted.

“Anyone considering buying a dog should thoroughly check its provenance and see the dog with its mother, to ensure they’re not buying from a criminal organisation. And taking simple precautions such as not leaving your dog tied up outside a shop, left inside an empty car or keeping it on the lead when in busy areas, will help reduce the likelihood of being targeted. It’s also vital to keep microchipping contact details up to date in case your dog does go missing and is handed in.”

On an individual police force level, West Yorkshire Police came in second, recording 199 reports of stolen dogs in 2021, nearly two thirds (59 per cent) more than in 2020, (125). Kent Police came in third, receiving reports about 182 stolen dogs in 2021, a 54 per cent rise on the number in 2020 (118). Lancashire Constabulary and South Yorkshire Police complete the top five forces for stolen dog reports in 2021, receiving 116 and 100 reports respectively.

In more positive news for owners, the number of dogs returned also reached a record high last year, with 617 stolen dogs found and returned. This is a 19 per cent increase compared to 2020, when 519 dogs were returned. Norfolk Constabulary reunited the greatest proportion of dogs with owners, returning 25 out of the 29 reported stolen, an 86 per cent success rate. Dorset Police reunited 14 of 17 dogs (82 per cent) and Derbyshire Constabulary reunited 37 out of 48 (77 per cent).

Steps to follow if your dog has been stolen:
Firstly, check the local area and your dog’s favourite spots in case the dog has wandered off
Engage the local community and make your dog ‘too hot to handle’ by sharing with local groups, putting up posters, informing local media and using social media – include pictures and any distinctive marks
There are some specific sites set up to help find lost and stolen dogs, like doglost.co.uk
Report your dog as stolen to the police and provide them with as much detail as possible
Report your dog as stolen to local pet related services like vets, animal shelters, pet shops, dog wardens and the council. Provide photos, a physical description and the dogs microchip number
Report your dog to the microchip database and make sure your contact details are up to date

1 Freedom of Information Act request made to all 45 Police Forces across the UK in January 2021, of which 35 (78%) responded with usable data. To estimate the total number of stolen dogs across the UK a calculation based on the national average number of dogs stolen and returned per 10,000 dogs (2.74 and 0.58 respectively) was applied to the number of dogs in the force areas that were unable to provide data.
2 2020 study took place in January 2021 when 37 of 45 (82%) of police forces responded to a FOIA request
3 The 2016 study covered the preceding three years, so data was collected for the most-stolen breeds for 2014, 2015 and 2016
4 Research conducted by Opinium among a nationally representative sample of 2,002 adults between 4th and 8th February 2022

Never leave your dog unattended in the garden, outside a shop, inside your car, when you walk vary your times and routes and keep your dog in sight. Be aware and keep safe.

Gardens and homes are the top choice of dog thefts. Please check your home security.