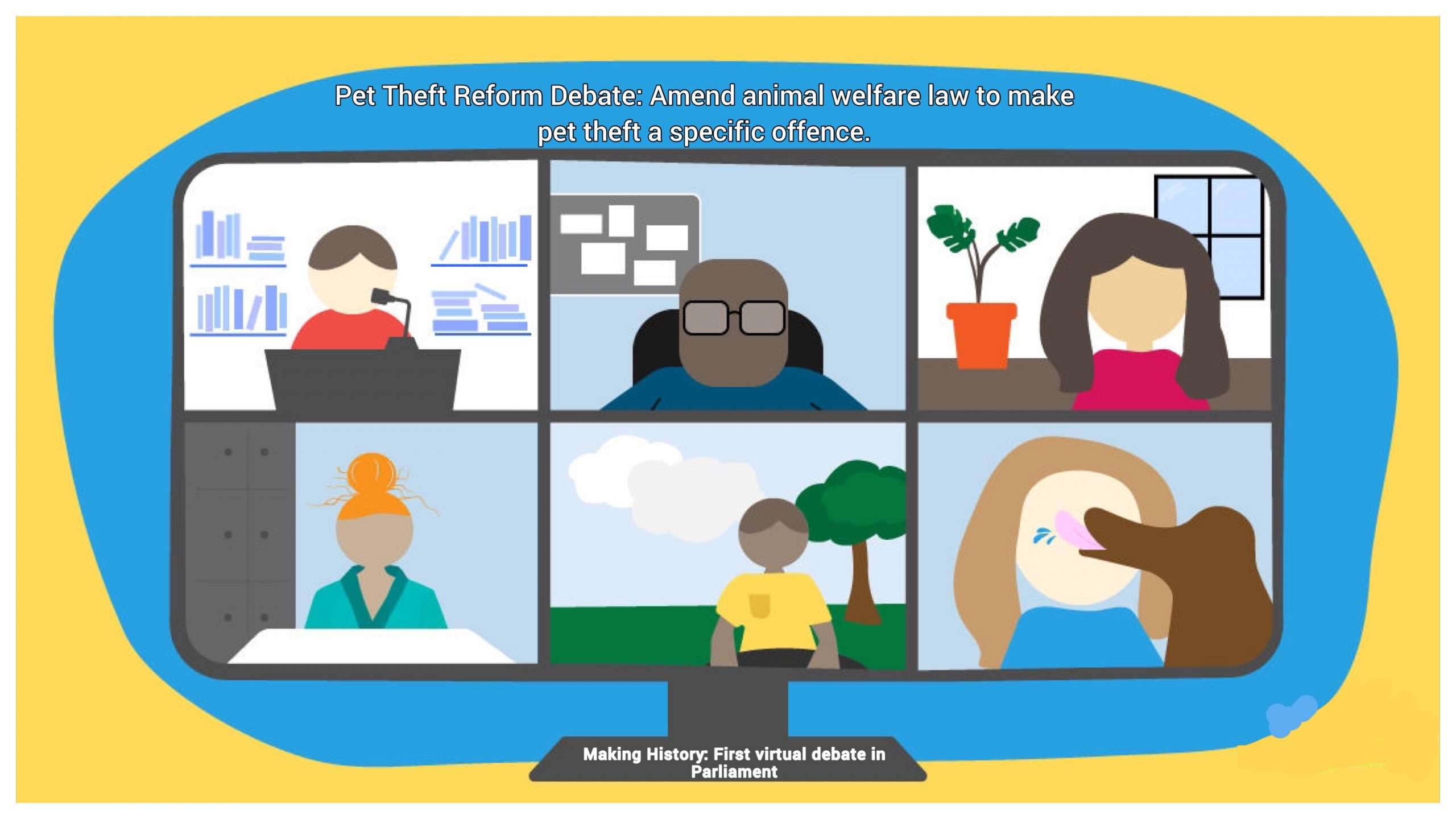 Today we are making history by having a virtual #PetTheftReform debate to: Amend animal welfare law to make pet theft a specific offence: https://petition.parliament.uk/archived/petitions/244530

Instead of the usual Parliamentary debate in Westminster Hall, Dr Daniel Allen, Debbie Matthews from Stolen And Missing Pets Alliance and Vets Get Scanning, Freya Goodhall, owner of stolen dog Willow, Patron Beverley Cuddy, Professor John Cooper QC, legal adviser and Marc Abraham, APDAWG and successful #LucysLaw campaigner, will be taking part in a Zoom call with MP Tom Hunt (Ipswich) who elected to lead the Pet Theft debate. We will put our case forward to the Defra Minister, George Eustice MP, who has the power to make the changes we need to protect our pets.

Watch the video of the discussion: https://www.youtube.com/watch?v=GOKQOIPVIpM

No one is really sure how our other supporting MPs will be able to support the campaign, which is always a crucial part in any debate. We are also unsure how long it will take the Minister to reply!

As you know the Pet Theft Reform debate has been delayed for the last year. First because of Brexit, then the proroguing of Parliament, followed by the Covid lockdown.

In case the Pet Theft petition was lost, Dr Dan has started another petition which is open now. If the Government don’t accept the changes needed, we are ready to get another debate immediately:- Make pet theft crime a specific offence with custodial sentences: https://petition.parliament.uk/petitions/300071

The Government always site microchips as a way of reuniting missing stolen pets. The Compulsory Microchipping Dog Regulations are under review at the moment and the Government say they are considering making it compulsory for vets, rescues and authorities to check microchip ID on pets they handle for the first time. This is not something that should be considered it must be put into action if stolen pets are to be reunited: Please sign this important petition that goes hand in hand with Pet Theft Reform. #FernsLaw https://petition.parliament.uk/petitions/300010

UPDATE FROM THE PETITIONS COMMITTEE:-

The Petitions Committee has written to Rt Hon Robert Buckland QC MP, Secretary of State for Justice, calling on the Government to make pet theft a specific criminal offence. The Petitions Committee is calling for the Government to ensure the value of pets is fully recognised in the law, and that sentencing options available to the court act as a real deterrent for those who may commit a crime that can have a devastating impact on pet owners and families.

This follows a discussion with Tom Hunt MP, a member of the Petitions Committee, and several petitioners and experts.

The letter calls for the Government to bring forward legislation, by amending either the Theft Act or the Animal Welfare Act, to supplement existing legislation in place to protect animals. This includes Finn’s Law to ensure service animals are protected and Lucy’s Law to crack down on puppy farming, which both were subjects of successful petitions on the issue.

Thanks,
The Petitions team
UK Government and Parliament