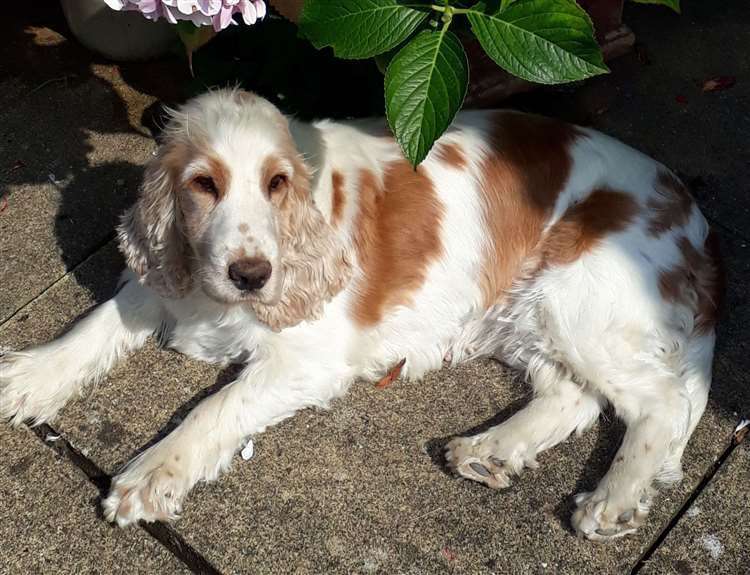 “Daisy is a rescue dog who had been taken in by two pensioners.

“It is very sad that she has suddenly been snatched from her new and loving family and we want to get her back.

A Facebook post appealing for the hound’s safe return has been shared widely on social media, increasing the hope that someone who may know who took the Nash’s pet might get in touch.

Police say they would like to hear from anyone with CCTV or dashcam footage which may show the white truck travelling from the A20 and then through Hollingbourne between 8.30am and 9am on the morning Daisy disappeared.

This is the truck believed to be driven by a suspected dog thief.

An image from a dashcam released by Kent Police shows a white flatbed truck which is reported to have stopped for a man to pick up the pooch before driving away up Hollingbourne Hill towards Sittingbourne.

Retired lecturer Pam Nash, who took in the rescue dog with husband William last year, says Daisy “has been our joy during lockdown” and she is desperate for her safe return.

Insp Steve Kent, of the Maidstone community safety unit, said: “The loss of a pet has a devastating effect on victims and our officers will pursue all potential lines of enquiry to recover a dog.

A Facebook post appealing for the hound’s safe return has been shared widely on social media, increasing the hope that someone who may know who took the Nash’s pet might get in touch.

Daisy, a white and tan cocker spaniel, was last seen near her home in Hollingbourne near Maidstone on Monday at around 8.50am.

STOLEN DOG DAISY – KENT: Daisy was picked up outside the Dirty Habit by a man in white ford transit one stop tipper truck with boxes and a broom stacked on the back. The van came along Greenway Court Road at 8.45 and headed up Hollingbourne Hill. We are now checking CCTV to see if we can get the reg.

PLEASE if you are the van driver who took Daisy from Hollingbourne yesterday let us have her back. She has been our pride and joy through lockdown. We rescued her as an ex-breeding bitch. She can be of no value to you.
We live just 2 doors from where you picked her up. ME171UT. You can drop her off whenever and wherever you like. We are in our 80s. Please have a heart.