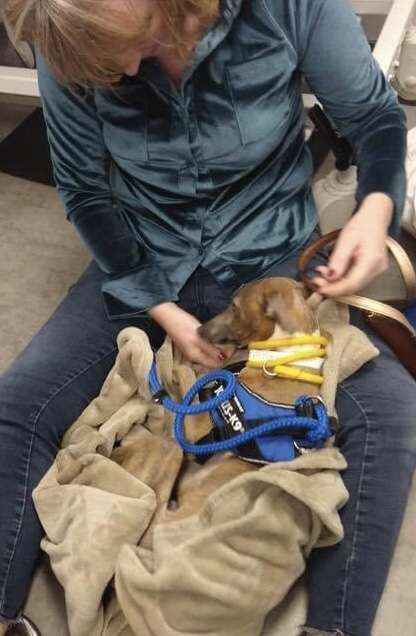 Heartbreaking update:- The emotional trauma my family went through for the long, almost 5 months, Sebi was gone was beyond horrendous #PetTheftReform

Sebi was stolen from us as a happy, confident 13 week old puppy, by 3 young men in a van.

The emotional trauma my family went through for the long, almost 5 months, Sebi was gone was beyond horrendous.

We had no break from the stress not even for a second. The first few days we were in shock, distraught and worried sick. A feeling like being punched in the stomach. After a few days, hope that someone ‘decent’ had ‘found’ him disappeared because we knew in our hearts that a decent person would have taken him to a vet to be scanned.

The sickness in our stomachs night and day, we couldn’t eat without being physically sick. We couldn’t sleep, if we did grab a couple of hours through exhaustion, we all experienced night terrors.

We panicked always – was Sebi alive or dead, was he tortured, was he terrified, did he cry for us and not understand why we weren’t there for him. Was he scared of the fireworks, was he cold, wet, hungry. Did he sleep alone or have someone/something to snuggle up to.

The torture was horrendous.

The only thing worse is that through Sebi’s behaviour, we have an idea of how he was treated.

He was seriously ill with meningitis shortly after he came home. The specialists told us this was probably through eating infected raw meat, excessive drugs or extreme stress. We think it was a combination of all three.

He only recognised raw meat (with fur on it) when he came home. His genitals were inflamed and enlarged, we believe he was given drugs to get him to breed at a younger age, he is absolutely petrified of young children (5 years and under ish) and shakes uncontrollably when he sees or hears ladders.

He weighed 7kg, about 5kg underweight. We could see every bone in his spine, ribs, his hip, shoulder and chest bones stuck out.
He is too hot in the house still.
He attacked our other dog when food was around, we couldn’t believe this from our gentle, loving Sebi. He was very head shy. He had been hit on his head/face – no question.

He is still on medication for the meningitis and it has a 50% chance of coming back.
We are still working through the other issues.

Sebi was not loved or cared for during his period with the thieves, he was probably hidden away in a cage because he struggled to walk properly in those first few days home.

People in the main don’t steal dogs to care for them. They are generally stolen for breeding, fighting or as bait dogs.

These little babies deserve our help. If a prison sentence deters one thief it’s worth It.

Thank you so much.