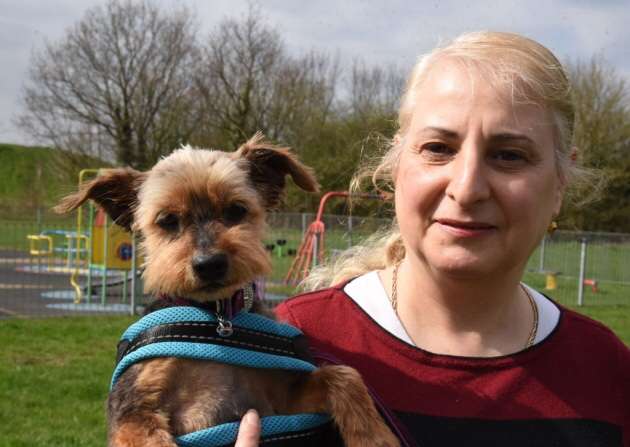 A Harold Hill grandmother couldn’t believe it when after more than a year the beloved dog she thought stolen was found tied to a fence – less than a minute from her home.

Social media posts online were shared thousands of times, but to no avail – until now.

Finally, on Tuesday, March 26, she got the best news she could ever imagine.

Twelve months ago, work was being carried out on Jayne’s house in Bell Avenue, and she let Tiffany out to go to the toilet.

About an hour later – Jayne had been caught up cleaning and was stressed from the work going on – she realised she had forgotten to let her pet back in.

When she went to find her she discovered Tiffany had wandered off through the open garden gate.

A few days later a post appeared on Facebook from a woman who said she had found a dog, matching Tiffany’s description, but when Jayne went to the police officers said there was no trace of the profile, and that this was common when dogs went missing.

Officers told Jayne Tiffany was now classed as being stolen, as they believed her new owner had no intention of returning her.

For months Jayne went door-to-door in the area handing out leaflets and putting up posters, appealing to anyone who might have seen the much-loved family pet.

Jayne Arkan with her dog Tiffany who was stolen a year ago and returned tied up to the gates of Keats Park.

Enlisting the help of Pippa’s Army on social media, posts trying to find Tiffany were shared more than 5,000 times up and down the country, and there were a number of sightings, but nothing came of any of them.

But earlier this week she got a call from the local dog warden, informing her Tiffany had been found.

An elderly lady had been walking through Keats Park – a one minute walk from Jayne’s house – and had found a dog tied to the fence with a piece of string.

After checking Tiffany’s microchip, the dog warden knew exactly who she belonged to.

Jayne told the Recorder: “I couldn’t believe it, I nearly cried when they told me.”

On the same day she was found, the mum-of-two took Tiffany to get a haircut at The Dog House in Hornchurch, where the groomer refused to take payment for the cut because she had heard about Tiffany’s story on Facebook.

The groomer – whose name Jayne doesn’t know – also found large ticks on Tiffany and said she needed to be taken to the vets immediately.

“I can’t thank this woman enough, I rang a number of places and she stayed later than she was meant to just to help me.

“I just want her to know how humbly grateful I am to her.

“I had never seen a tick before, I didn’t know what they looked like, I didn’t have a clue.

“It probably saved her life, she would have been paralysed if they had been left in her any longer,” said Jayne.

At the vets, around 20 ticks were found in Tiffany’s fur, and Jayne thinks this is why she had been left in the park.

“I can’t thank everyone who has helped more than enough, I still can’t believe we’ve found her.

“She is going to get lots and lots of cuddles, and will get all the love in the world now she’s home.

“The support has been amazing, and we wouldn’t have been able to find her without the help of everyone on Facebook, and who has helped over the last year.”