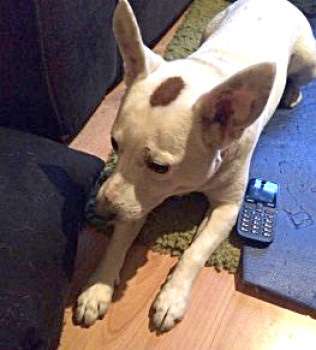 Copied Post:- So after my millionth post in many, many London Facebook pages looking for Freddie , yesterday I had a breakthrough and someone recognised him. With Diane’s help (sorry hun, I can’t tag you!) we finally managed to contact the woman who had him. She was given him by someone 2 and a half weeks ago and has been searching for the owner. It’s a massively long story which includes me talking to her nephew in Bermuda 😂

Today this happened……… You Will need tissues 💜

My dog has just been stolen outside of the #Deptford highstreet Asda, anyone in the south #London area who sees this dog please contact the police or me IMMEDIATELY!

Anyone in the #Lewisham or greater #London area, please share this image around in hopes that someone can locate my dog Fred. Image is not recent but it is the best I have which shows the birth mark on his head so he can be identified easily. If seen with someone contact police!

He was stolen on the 9th of this month at around 6pm, has been registered on dogs lost since and other than CCTV of the thief clear as day that we’re not allowed to see we have nothing to go off of. If anyone has any information then please contact me. There IS a reward!

The only lead I have is that the thief is most likely a woman called LuLu, was told on the day that she was white but was recently told that there’s a LuLu matching the description from Asda security but instead of white she is Asian.

This LuLu is apparently a well known dog thief and was arrested in the Asda a week prior to the dog theft, was released from prison a day prior and is a known druggie as well according to sources.

According to sources she is around 5″6″, has 1 middle tooth, is a known dog thief within the area, lives in #Greenwich and is either white or Asian (Chinese). If a woman matching this description is spotted call the police!

We have a possible sighting of Fred! All within the #Lewisham / #Southwark area’s please be on the look out for a stray dog loose near Amersham vale! Thief may have ditched him in an attempt to save herself from justice!

Has he been sold on?

or call Metropolitan Police Service on 101.