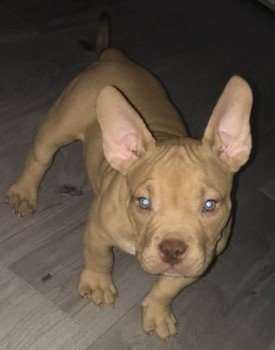 FANTASTIC news BLUE is safely back home, back in time for Christmas. So happy for that little boy. 10th December 2021 #PetTheftReform

Boy, 4, in tears walking the streets searching for his ‘best friend’

BLUE is a 8 month old, pocket Bulldog stolen from garden in Kirkdale on 6th December 2021.

A heartbroken mum is desperately searching the streets in the hopes of making her son’s only Christmas wish come true.

CCTV image of thief in this link. Unusual while stripe to back right leg of trousers. Do you recognise this person? https://www.facebook.com/groups/liverpoollocksmith/permalink/3147587948807473/

Melissa Monaghan, 26, said she and her four-year-old son, Paul Goodwin, are “absolutely in bits” after their eight-month old pocket bulldog Blue was allegedly stolen from their home.

Blue was let out into the garden on Monday afternoon in the Kirkdale area when Melissa claims “he was cruelly snatched.”

Breaking down in tears, Melissa told the ECHO that her son Paul has been “stressed and crying his eyes out” as he helped his mum search the streets for “his best friend”.

She said: “We’ve been out searching the streets for him, I’m out now as we speak, I just want him home.

“I put Blue in the back garden for the toilet and I was cleaning up. I went upstairs and came back down to let him in and saw he wasn’t there.”

Melissa claims she has reported the alleged theft to Merseyside Police and has CCTV showing a man in her garden at around 5-6pm on December 6.

She added: “My little boy is obsessed with Blue so he chose his name.

“They were the best of friends but now he’s stressed, he’s crying his eyes out and not sleeping. We are both heartbroken over it.

“He’s only eight months old, we’ve not had him very long and he’s only been out twice because he’s not long had his needles.”

Melissa, of Oriel Crescent, pledged that she “will not stop until I find this dog”.

The 26-year-old added: “Everyone is helping to share information and doing their best, I’m so thankful, we need to make sure this dog is not sold.

“Blue is like another baby, another son, to me.

“Neighbours have been telling me this is unusual, there’s never really been an issue like this around here. I just want my dog back, that’s all I ask. Please bring him back home to us, he will be terrified.”