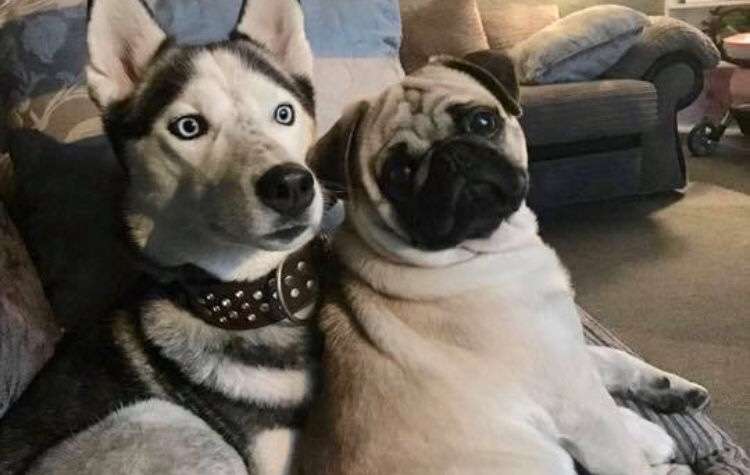 An Ashton Mum has launched a desperate appeal to find her two dogs Buster and Luna, who went missing nearly five weeks ago.

The pug and husky pair escaped from Alex Walton’s garden in Ashton-under-Lyme, Tameside, Greater Manchester, on the 8th December’18 and were last seen on Hartshead Pike, with only possible sightings since.

Alex, 28, who adopted both of them as rescue dogs says that her family are absolutely heartbroken – adding that having to explain to her youngest that their beloved pets wouldn’t be home for Christmas was devastating.

“We had a husky who passed away two years ago, so we thought we’d get two more dogs to bring into our family. It honestly feels like they’ve always been here – Luna and Buster are my kids’ best friends.

“I had to tell my little girl that Santa needs them to help him deliver presents and toys this year and that’s where they’ve gone. We’ve had big signs printed with their photos and she always blows kisses to them.”

A Facebook page titled “Find Buster and Luna” has been set-up in a bid to bring the much-loved pups home and has already hit over 1,500 members determined to help the cause.

Alex added: “The response has been overwhelming –  all these people have come together for two dogs.”

Three huge banners have been displayed around the Ashton area with Luna and Buster’s images on them, urging anyone who might see them to not shout or chase them but to call Alex on the number provided straight away.

Both dogs are chipped, with three-year-old Luna described to have black spots on her face and around her neck, as well as wearing a collar. Buster, who is two, has a black face “mask” with fawn colouring and is “stocky”.

If you think you’ve seen Buster or Luna, or have any information you think might help Alex in her search, call: 07526318310 or get in touch using the Find Buster and Luna Facebook page.