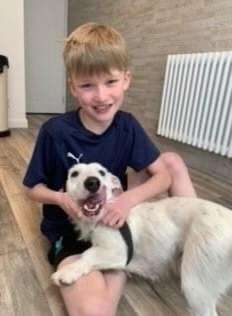 This loveable Sealyham Terrier disappeared from the West Cornforth area on the evening of Monday, April 2, leaving Ellis devastated.

His parents reported Duggie’s disappearance on the Dog Lost charity website, and then kept their fingers crossed that positive news would just be around the corner.

After no sightings for more than a week, the family grew increasingly concerned.

But then a breakthrough came when volunteers from DogLost received information about Duggie’s possible whereabouts.

Officers from Durham Constabulary attended an address in Durham City yesterday and found the Terrier fit and well.

Enquiries into the circumstances of Duggie’s disappearance are still being carried out but yesterday afternoon he was reunited with his owners.

Durham City Neighbourhood Inspector Dave Clarke said: “It is fantastic that we have been able to reunite Duggie with his owners. They had understandably been extremely worried about what had happened to him.

“Duggie is a key member of this family, and he was delighted to see them again – it was like he had never been away.

“We are grateful to the volunteers from Dog Lost who acted swiftly with passing on the information to us to ensure we could carry out our enquiries.” Reunited on 14th April 2022.

• Anyone who finds a stray dog is asked to contact the neighbourhood wardens at Durham County Council or Darlington Borough Council depending on your location as they will be able to help relocate the dog with its owner.