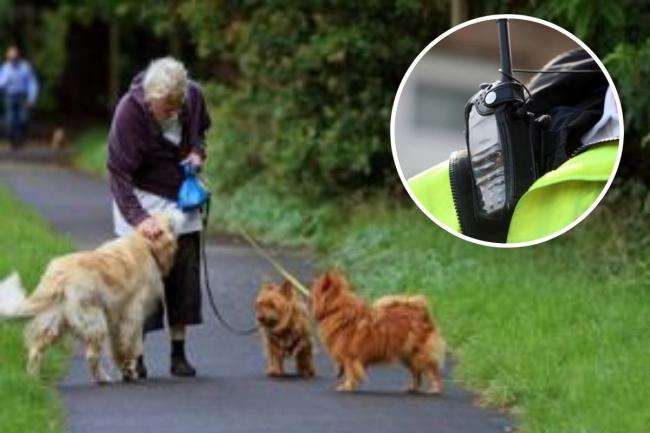 FEMALE dog owners are warning others to be on the alert after they were approached by men who tried to take their pets.

In one incident a rescued dog was grabbed while being walked by her heavily pregnant owner. Police are investigating.

She told the Adver: “I was at Shaw Forest at about 11:30. I was walking back towards the car park and he was kind of crouched behind a hedge. He looked friendly enough, I was sort of interacting with him but not verbally. Then he went down to grab her. I screamed and then the dog panicked and he ran away.

“She is a rescue Jack Russell so I think it scared her. If anything had happened, I am eight months pregnant so I wouldn’t have been able to do anything. I was on my own that day that day but I’m not taking her on my own again.

“I reported it to the police and said they were looking into it and doing more patrols, checking to see if anyone is being suspicious. I don’t go out at night anymore and she stays on the lead. I take someone with me. It’s only the last two days that she’s stopped shaking.”

A man attempted to take the lead of Kayleigh Groom’s dog in Ocotal Way. She and two-year-old mongrel Hans were heading towards the County Ground at 2.30pm. “I was walking across to the pavement and he was gesturing his hand trying to take the lead. I just said no and he carried on walking,” she said.

“I’ve reported it to the police as I’ve read all the stories people of people being approached. I wouldn’t have thought it would happen in daylight. I initially thought he was drunk or on something, he looked at me like he knew me. He was smiling at me and didn’t say anything. It was like he knew me like a friend who would take your dog from you while you’re in the shop. My dog is a mixed breed and he is quite small, only 20 kg, he’s like a little Labrador.

“I’m just shaken up and I was a bit complacent because dogs are always on leads. He’s just a mongrel, you know some dogs are neutered so if they had managed to get them what would they do with him.

“But the price of puppies did go up during lockdown. He’s only a little rat it seems crazy if you’re going to steal a dog you think it would be a pedigree or something.”

Jayne Coulton contacted the Adver because she is worried for elderly people who may not know about the problem.

“I’m just thinking about all the old people we see out with their dogs. They don’t have smartphones so may not see it.

“Older people can’t run and they may not be aware of this issue happening in Swindon.”

A Wiltshire Police spokesman said: “We don’t want people to panic and we wouldn’t want to worry people unnecessarily, as at this stage it seems to be a very small number of reports of suspicious activity rather than thefts or attempted thefts.

“However, we would always urge dog owners to report suspicious activity to us via 101 or our website, and would remind everyone to be vigilant and ensure their dogs are locked inside or kept in safe and secure kennels.”