The Stolen And Missing Pets Alliance’s (SAMPA) Dog Theft Awareness Day is in it’s sixth year, an annual event held on 14th March and is the start of Pet Theft Awareness Week.

No one is safe from this crime, which hits families, the elderly and the disabled. The loss of a companion and family member is devastating.

Over the last five years, we have seen a steady increase year on year and 2021 continues to  surpass any expectations, with demands for dogs increasing during Covid lockdown and the trend continues with puppy prices at an all time high.

We are delighted to report the due to our work on Pet Theft Reform and the help of Tom Hunt MP, Siobhan Baillie MP, Iain Duncan Smith MP, Robert Buckland MP and Priti Patel, the Government set up a Pet Theft Taskforce which resulted in the news that Dog Abduction would become a specific offence in the Kept Animal Bill and is working it’s way through Parliament now.

The new law will  give courts access to appropriate custodial sentences to act as a deterrent, provide punishment, and protect the public and give the Police more powers.

Our concern now is what happened to cats? Cats are family too!  Our co-founders at PetTheft Awareness have recorded a cat theft increase from FOI police data and their new report will be released during Pet Theft Awareness Week.  There is also a petition to include cats in the Dog Abduction offfence: Petition link to sign

We noted there are some discrepancies on theft figures with police FOI’s, also bearing in mind that one Crime Reference Number refers to the crime not the number of dogs taken. We asked Mark Randell, from Hidden In Sight, why this is happening?

Mark Randell is a retired Senior Detective who has now dedicated his time tackling animal abuse. He told us,

“2020 has seen an explosion in Pet Theft reports although exact figures are unknown. As a retired Senior Detective  who used to have responsibility in deciding operational police activity based on crime analysis, I fully understand the value of accurate data.

There are 4 categories of Theft under the Home Office Counting Rules. This is done so that Police Forces can report on crime levels and performance.

Theft from the Person,

Other thefts are then sub-divided.

includes Dishonest Use of Electricity or Theft from a Machine. So ‘Pet Theft’

alongside anything else that doesn’t have a home, perhaps a stolen wheelbarrow.”

Mark went on to say, “It is no wonder then that the exact level of this crime explosion is unknown.”

Organised crime has been the driving force behind Dog Theft, which is a criminals dream job, because it’s seen as low risk with high rewards.  The new Dog Abduction offence will act as a deterrent and give pet owners more protection.

Until the new law is in place to protect our dogs they will continue to be listed under ‘other thefts’ as second hand goods with low replacement value.

We know there have been many reports in the national and local press over the last few months on the increasing numbers of dog thefts and attempted dog thefts. We just want to point out that fortunately the risk to each of us is low, and being Dog Theft Aware, will reduce the risk further by following simple guidelines.

You need to be aware and alert on your dog walks:

Walk with other dog walkers.

Walk at different times of the day and vary your route

Keep your dog in eyesight.

Don’t wear headphones or talk on your phone.

Never leave your dog unattended in your garden, outside shops or in the car.

Check your home and garden security, consider outside sensor lighting and CCTV.

Call 999 if you’ve seen your dog being taken.

Call 101 if you suspect your dog has been stolen or reporting suspicious activity.

Get on social media.

If your dog disappeared right now, would you know where to find the microchip registration? Keep your dogs microchip number and the database contact number in your phone!

Don’t know your dog’s microchip number, get the vets to check it for you for free.

Dr Daniel Allen, Animal Geographer at Keele University and SAMPA Patron, responsible for three successful #PetTheftReform petitions and two Parliamentary debates continues to work behind the scenes. Facts and Figures can be found on the Pet Theft Reform website: https://www.pettheftreform.com

Don’t leave your dog outside a shop or supermarket

Don’t let your dog out of sight during exercise

Don’t leave a dog unattended in a vehicle

Make sure your garden, house and outside kennels are secure.

IN CASE OF EMERGENCY:

Always have the following information in your mobile phone:

A clear photo of your pet, showing any distinguishing markings

Check your contact details are correct and up to date and flag as missing.

Make sure your details cannot be changed without your permission

PLEASE BE CAREFUL OUT THERE!

52% of dogs are stolen from gardens.

19% of dogs are stolen in house burglaries

16% of dogs are stolen while on a walk

7% of dogs are stolen while being tied up outside shops

5% of dogs are stolen from cars

NO WHERE IS SAFE ANYMORE. 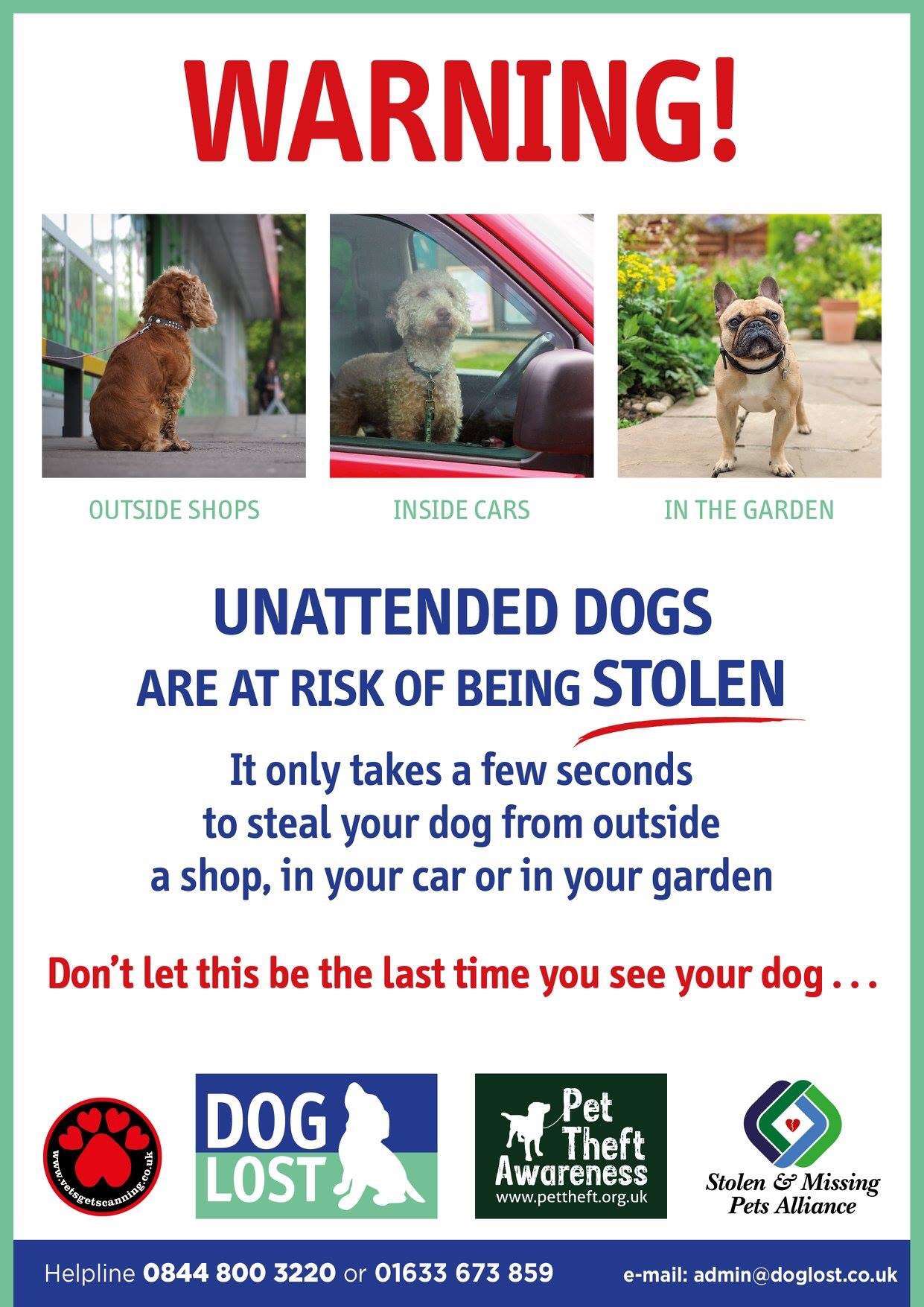 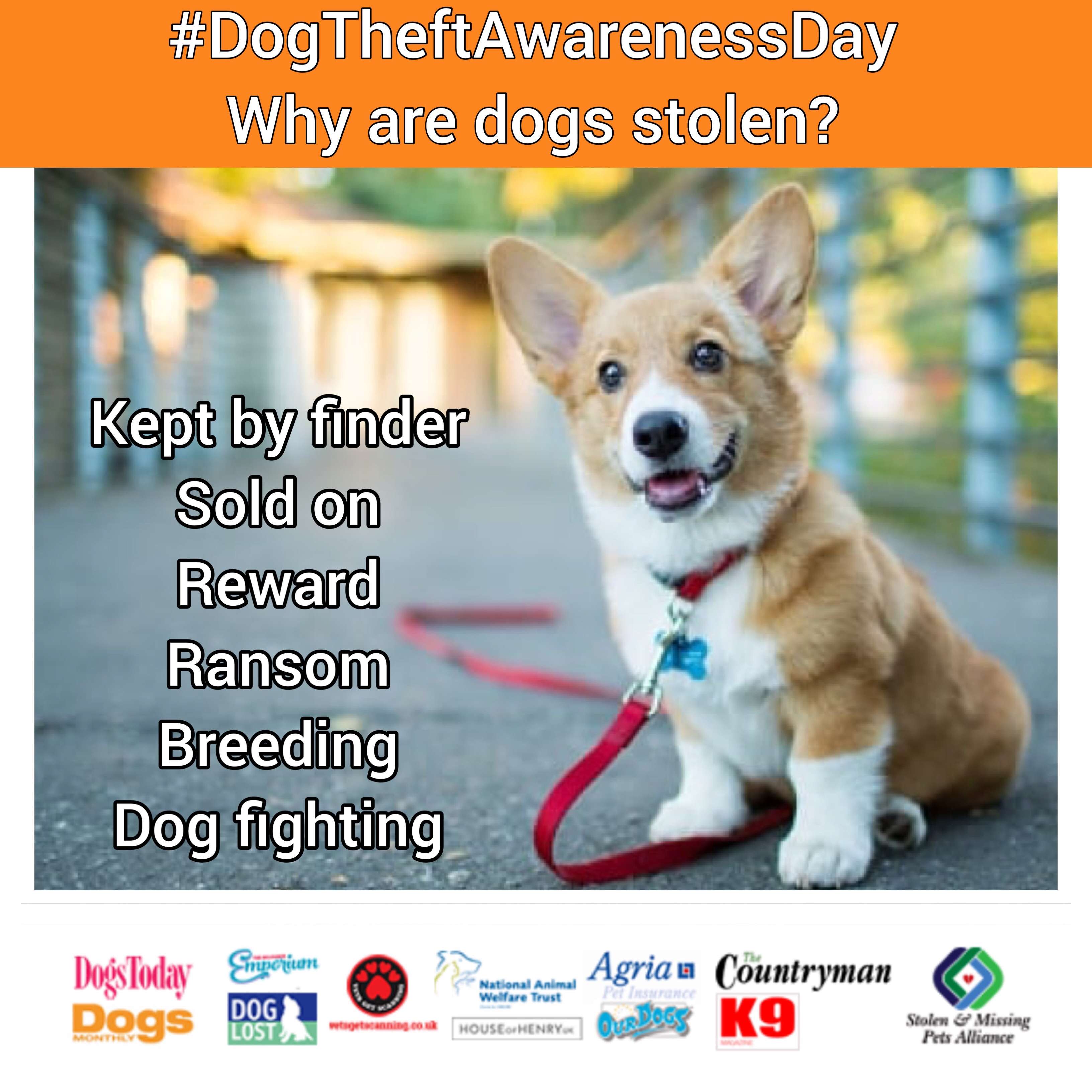 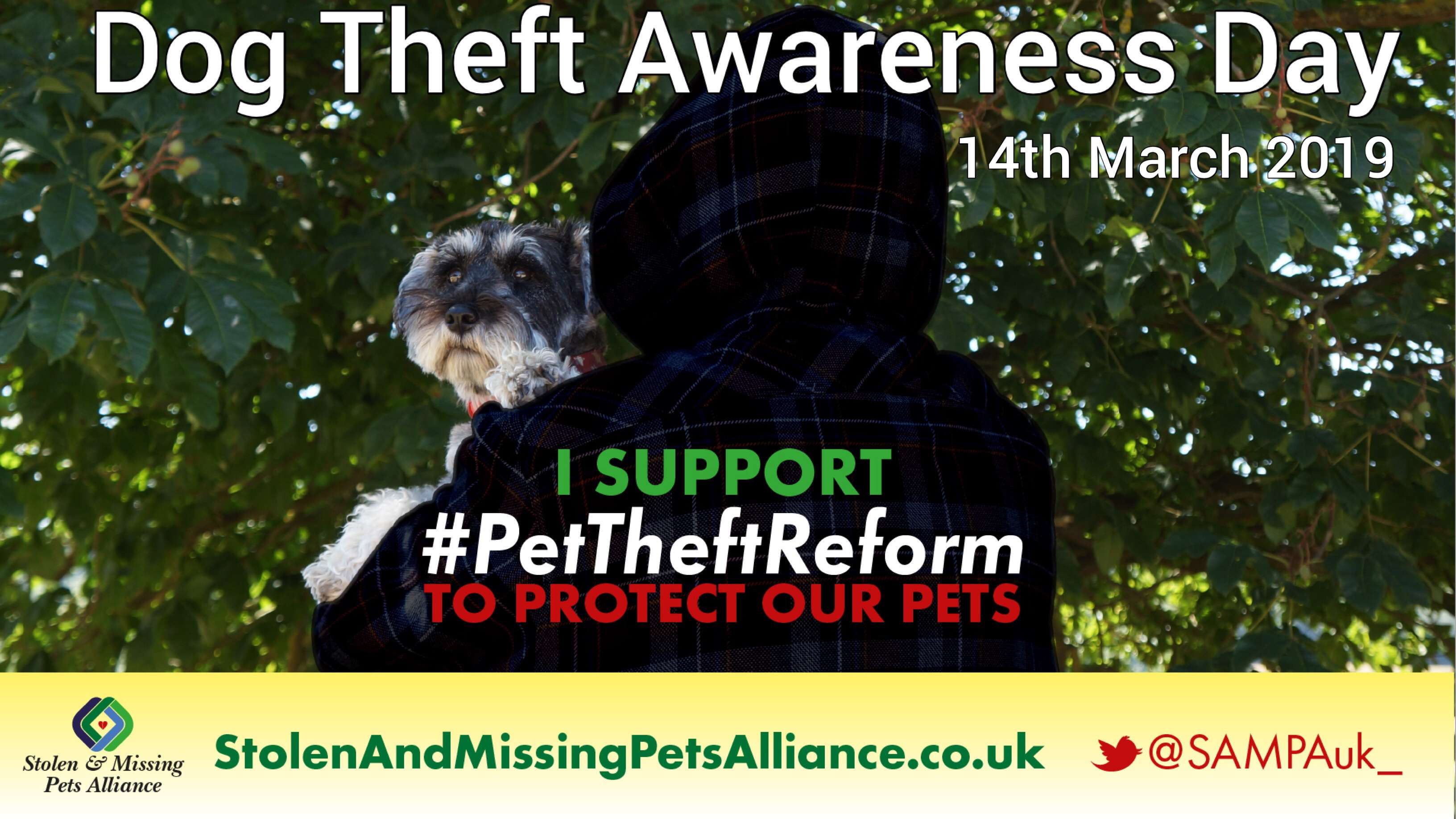 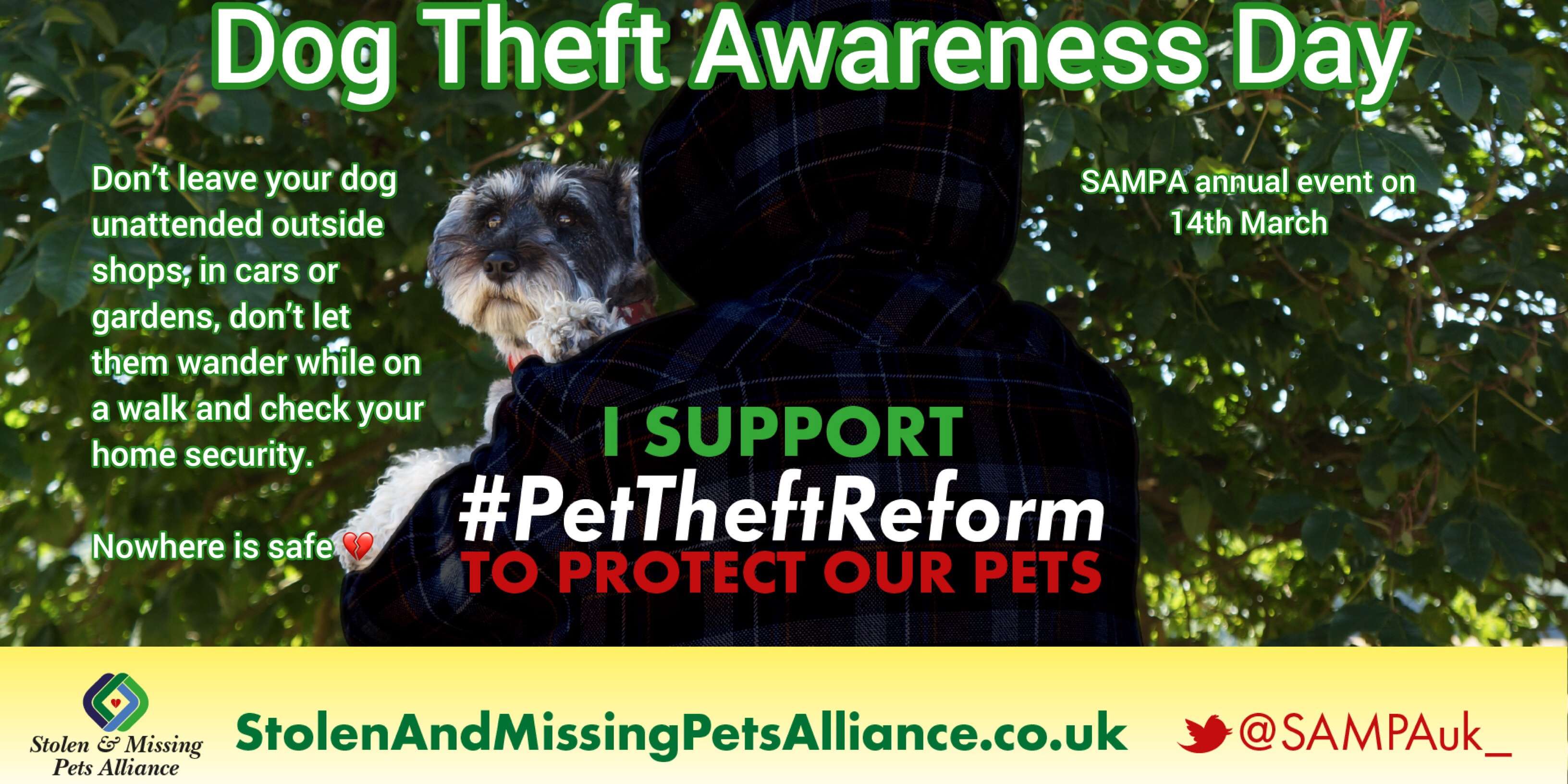 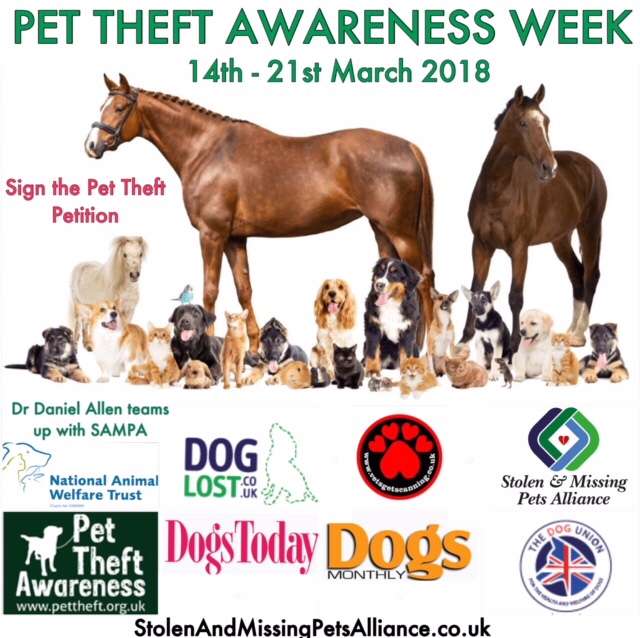 SAMPA wants to lobby Parliament to change the way animal theft crimes are reported and punished, in recognition of the importance pets play in our family lives. 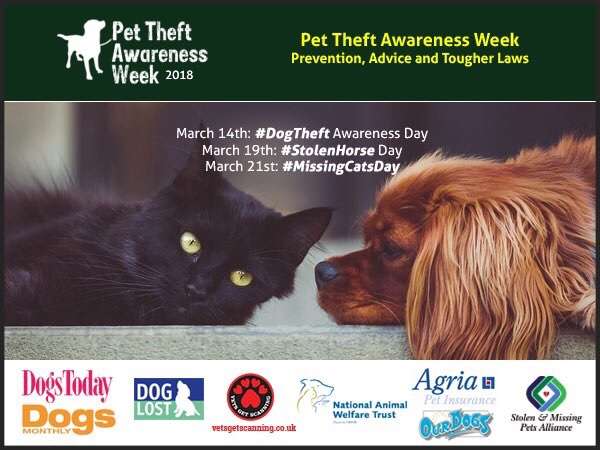 Our pets are categorised as ‘property’/ ‘personal items’ in law which explains why Pet Theft is on the increase. The punishment does not fit the crime and this is why we need the Government to Reclassify the theft of a pet to a specific crime in its own right. 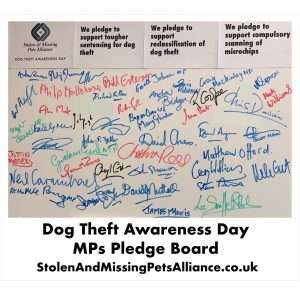