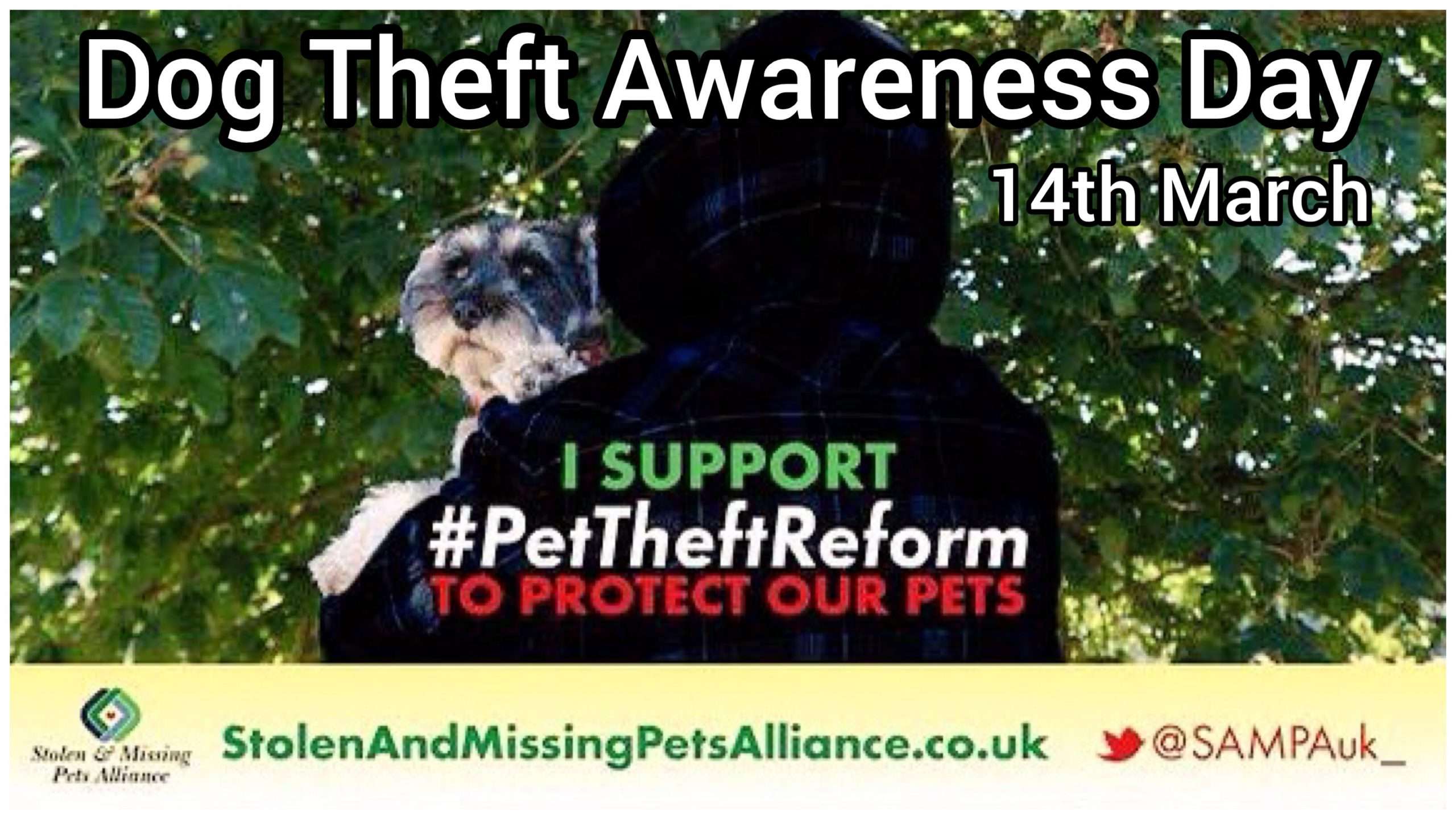 We continue to warn dog owners that nowhere is safe! Dogs are stolen from gardens, in house burglaries, on walks, from kennels, tied up outside shops and vehicles.

Thieves know while our dogs remain random personal items or ‘property’ in the 1968 Theft Act, valued as 2nd hand goods under £500, the punishment is a small fine, even if the dogs are still missing.

Over the last four years Police freedom of information (FOI) requests have revealed that at least five dogs a day are stolen.

Please note that not all police forces submitted a response to the FOI request, it’s difficult to get specific dog theft numbers as a ‘dog’ is classified as ‘property’ and property theft is spread across the following categories and the police do not have time to check the numbers of stolen dogs.

Please also note that a Crime Reference Number (CRN) does not represent the number of dogs taken at one time.

Crime data is broken down into ‘major’ and ‘minor’ crime types.

Please note that motor vehicles and pedal cycles have their own categories with separate definitions, something we believe should be awarded to our priceless and irreplaceable dogs and other domestic pets.

In the four years since Dog Theft Awareness Day started we can safely say that police figures reveal that the minimum number of dogs stolen is 7,300, with only a handful of dogs being reunited and only a few reaching court.

We know from Dr Daniel Allen’s academic paper on Dog Theft that figures have increased while prosecutions have decreased:- https://www.mdpi.com/2076-2615/9/5/209

Doglost.co.uk have stated that the figures from the police are more likely to be doubled, to around 70 dogs a week being stolen, according to their numbers of missing dogs on their own database, police figures never include ‘Theft By Finding’, failing to attempt to find the owner.

The 13 microchip databases that meet Government standards are reluctant to reveal the number of missing dogs, cats or horses that are recorded on their own databases.

We may never find out how many stolen and missing pets there actually are out there!

Compulsory to microchip dogs and horses, with cats now being considered, the microchip system fails many as there is no legal requirement to scan and check microchip registration on the original database and now the many loopholes are being justified by animal authorities to avoid reuniting missing pets with various harmful excuses.

1. The veterinary profession do not have to check microchip registration on the original database at a pets first consultation to establish if the pet presented is reported as missing.

2. The veterinary profession do not have check microchip registration on the original database at a pet’s annual health check if no prior check has been performed previously.

3. Rescues and rehoming establishments do not have to cross check microchip registration on hand-in, seized or abandoned pets.

4. Council road services do not have to check deceased pets for a microchips prior to disposing into landfill.

5. Canal and River Trust do not have to check deceased pets for a microchip prior to disposing.

Ironically the Government did make it mandatory to scan and check microchip registration on deceased dogs and cats found on the highways:- https://hansard.parliament.uk/Commons/2015-03-02/debates/15030217000001/Harvey’SLaw

‘Best Practice‘ recommendations are not acceptable. The public deserve guarantees to help find their priceless and irreplaceable pets, who are considered to be members of their family.

Vet nurse appeals to her profession to help change their stance on compulsory microchip checking to help find her dog Peppa.

Defra have been clear that the Compulsory Microchipping of Dog Regulations have been put in place to save the council’s money on dog kennelling and say in responding to various Government petitions:- https://petition.parliament.uk/archived/petitions/104379

“The Government does not consider it necessary therefore to require everyone who comes into contact with a dog to scan it in order to check compliance with the microchipping requirements or to establish whether the dog is lost or stolen”.

This totally erodes the microchip system and confirms the system is not fit for purpose. It appears to be forgotten that microchipping was sold to the British public as a reunification tool and the reason millions of pet owners have microchipped their pets!

Microchipping should not just be in place for domestic pets picked up as strays. This is a fairness issue, and this one system should support all pets equally and Compulsory Microchip Checking would go a long way in reuniting so many distraught families with their missing microchipped pets.

What happens when your dog’s microchipped: Information on the Government web page:-