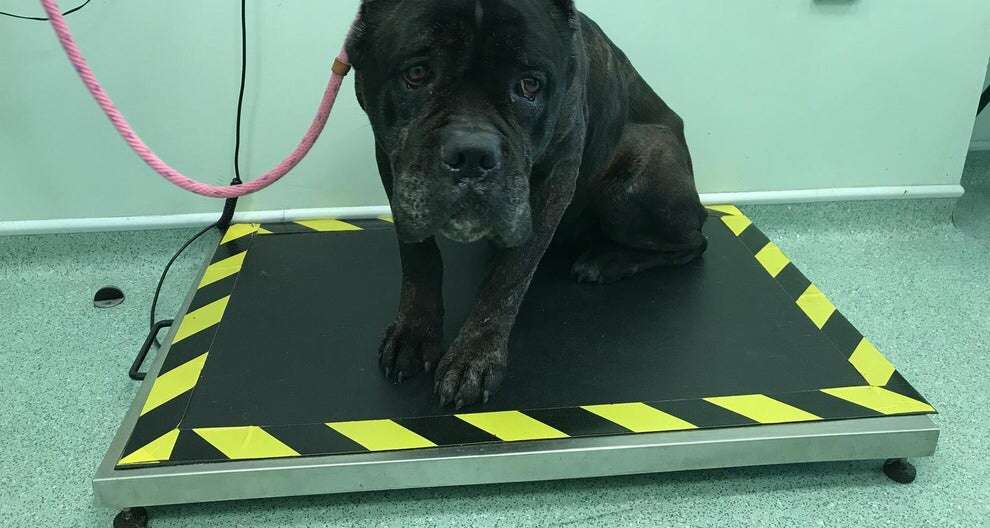 Do you recognise Alexis? She was zipped in suitcase, weighed down with bricks and dumped in Corby balancing lake!

An emaciated and collapsed dog is believed to have been dumped in a suitcase which was weighed down with bricks and thrown into a balancing lake at Pen Green, Corby.

The brindle Cane Corso Italian Mastiff dog was found cold and terrified by a local resident who saw the dog on a playing field at about 6am on Thursday (Feb 27) in Pen Green Lane.

She went for a closer look and saw the pet was in poor health, with a large ulcerated mammary tumour and was clearly underweight, so she contacted the dog warden who took her to a vet’s for emergency treatment and the matter was reported to the RSPCA.

Inspector Ann Bennett was sent to investigate and said that around the same time a red suitcase containing bricks along with a spade was recovered from Pen Green surface water balancing lake, about 30 metres away from where she was found.

At the time the dog, whose microchip reveals her name is Alexis and is aged eight, was found she was wet suggesting she had been bundled into the suitcase – which was found half open – and thrown into the water.

Ann said: “It seems too much of a coincidence to find the dog wet and then to find a suitcase nearby with bricks so we believe she was dumped in the water in this way.

“At this stage we are not sure of the significance of the spade unless there was a plan to bury the suitcase.

“Fortunately for some reason Alexis was able to escape from the suitcase, which was recovered half open – and she was found by a kind member of the public.

“Alexis was in poor health, she was emaciated and had a large mass on her face so it suggests someone decided to dispose of her in such a callous way rather than seeking the veterinary treatments she was so desperately in need of.

“The vet found a microchip which revealed her name and we are making inquiries to establish the address she was registered at.

“We would like to appeal to anyone who recognises this distinctive dog to come forward. I am also appealing for anyone who may have seen something suspicious in the area – particularly with this red suitcase – to contact me.

“Alexis is such a friendly dog who we believe was dumped to die so we are keen to find the person who could do such an awful thing.

“She was so lethargic she didn’t have the energy to eat and had to be hand-fed and obviously she must have been terrified.

Alexis has a number of medical issues and is currently receiving treatment at the RSPCA’s Newbrook Animal Hospital for the mammary tumour, arthritis, a chest infection and his emaciation.

Ann added: “Alexis is responding well to treatment thanks to the amazing staff at Newbrook.

“I would also like to thank the member of the public who found Alexis and stayed with her until help arrived.”

Anyone with information about the incident should contact the RSPCA’s appeals line number on 0300 123 8018.