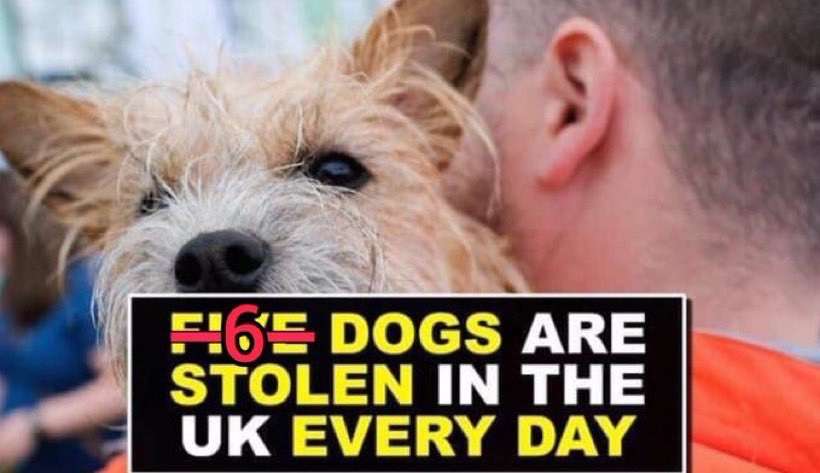 Direct Line Dog Theft Figures for 2018 – 2019 have arrived:- 6 dogs a day are stolen across England and Wales but they say Police figures show a fall in dog thefts? #PetTheftReform

This information is based on Freedom of Information Act (FOIA) request made to Police Forces in England and Wales in February 2020. 35 of 45 police forces (78%) responded with usable data.

Our Patron Beverley Cuddy is doing radio interviews across England and Wales today.

Beverley wanted to check the new figures and was told by Direct Line, ‘We are sure of the figures – the reason they have changed from last year is because we used a different methodology this year. This allowed us to extrapolate the figures to cover the police forces which didn’t respond, giving us a better national picture.’

New research from Direct Line Pet Insurance reveals that, for the first time since the study began in 2014, there has been a fall in the number of dogs reported stolen across England and Wales. In 2019, an estimated 2,026 dogs were reported as stolen to police forces, a fall of 23 per cent compared to 2018 (2,625).

Despite this, however, six dogs were still reported as stolen every day.

Dog theft across England and Wales fell by 23 per cent in 2019 – the first decrease since survey began, with an estimated 600 fewer pets stolen last year than the year before
Despite this, an average of six dogs were reported stolen every day across England and Wales
2019 saw a rise in the number of crossbreeds (up 42 per cent) and cocker spaniels (up 93 per cent) stolen but a fall in the number of French Bulldogs (down 65 per cent) and Jack Russell’s (down 69 per cent)
In 2019, over a fifth (22 per cent) of stolen dogs were returned to their owners

New research from Direct Line Pet Insurance reveals that, for the first time since the study began in 2014, there has been a fall in the number of dogs reported stolen across England and Wales. In 2019, an estimated 2,026 dogs were reported as stolen to police forces, a fall of 23 per cent compared to 2018 (2,625)2. Despite this good news, on average, six dogs were still reported as stolen every day.

For the sixth year in a row, Staffordshire Bull Terriers are the most popular breed of dog to be targeted by thieves, with 89 dogs stolen in 2019. Crossbreeds remain the second most commonly targeted, although the number stolen in 2019 increased substantially, by 42 per cent. This is perhaps partly due to the popularity and expense of so-called designer dog breeds like Puggles and Schnoodles. Chihuahuas remained in third place in the table, although with a slight reduction (four per cent) in numbers stolen compared to 2018.

Yorkshire Terriers, which did not make it into the top 10 most commonly stolen breeds in 2018 are now sixth, with triple the number stolen in 2019. This may be partly due to their popularity among well-known celebrities such as Serena Williams, Simon Cowell and Steven Tyler. Lurchers and Border Collies were also outside the top 10 in 2018 but are both now among the most popular targets for thieves.

Table one: Top 10 most commonly stolen dog breeds in 2019

Dog Theft police figures are down -23% on the previous year.

Breeds that have fallen in popularity for thieves include French Bulldogs, which saw a 65 per cent reduction in the number stolen in 2019 compared to 2018. Jack Russell’s have gone from being the 5th most commonly stolen breed, with 39 thefts in 2018, to 10th, with just 12 thefts in 2019. Pugs have also reduced in popularity, having fallen from the sixth most common breed stolen in 2018 with 24 stolen, to 11th in 2019 with 10 stolen.

Eva Sandstra-Bennett, Head of Pet Insurance at Direct Line, said: “It is encouraging to see that the number of dogs stolen has fallen over the last year and, during the current lock down period, we expect this to drop even more. There is a risk, however, that these numbers may start to rise again as Lucy’s Law which came into force in April restricting sale of puppies from third parties, could result in some thieves having to take drastic measures to access certain breeds.

“Dogs are such an important part of our lives, so to have one stolen is like losing a member of the family. We urge dog owners to be extra vigilant while out on their walks or in the car and not leave their beloved pets alone. Simple steps like not tying dogs outside of shops or leaving them in cars can help reduce the likelihood of becoming a target for thieves.”

In more positive news for dog owners, the number of dogs returned to their owners in 2019 increased. In 2018, 410 dogs were reunited with their owners, but in 2019, 430 were reunited, a rise of five per cent. This means nearly one in five (22 per cent) stolen dogs were recovered.

London (17 per cent) and the South East (16 per cent) remained the dog theft hotspots in England and Wales, with the two regions accounting for a third of all reported cases of dog theft last year. The Metropolitan Police Service reported the greatest number of dogs stolen, at 329 in 2019, a slight rise of eight per cent on 2018 (304).

West Yorkshire Police received the second greatest number of reports (167) of stolen dogs in 2019, while Kent saw the third highest with 100 reports. Both forces, however, received fewer reports of stolen dogs in 2019 compared to 2018, a reduction of seven per cent and four per cent respectively. Alongside the Metropolitan Police, the top 10 police forces which saw increases in the number of dogs stolen in 2019 were Leicestershire Constabulary (26 per cent), West Mercia Police (23 per cent), Essex Police (19 per cent) and Durham Constabulary (16 per cent).

At the other end of the scale, Warwickshire Police and Northamptonshire Police received just eight reports of stolen dogs in 2019, while Avon & Somerset Constabulary received nine. Humberside Police was the force which saw the greatest reduction in reports of dog theft, receiving 147 in 2018 but just 31 in 2019, a fall of 79 per cent. Greater Manchester Police and Dorset Police also saw substantial reductions in reports, with the number of cases falling from 58 to 24 (down 62 per cent) and 161 to 61 (down 59 per cent) between 2018 and 2019 respectively.

Eva Sandstra-Bennett, Head of Pet Insurance at Direct Line, continued: “It is great to see that the number of dogs returned to their owners is on the rise across the country, giving hope to those who have had their dog stolen. The positive changes in the law in recent years, such as microchipping become a legal obligation, will have contributed to the improvements in reuniting owners with their lost pets and we hope that this continues in the coming years.”

Steps to follow if your dog is stolen:
Firstly, check the local area and your dog’s favourite spots as your dog may have wandered off

Make your dog ‘too hot to handle’ by sharing on social media, putting up posters in the local area and informing local media – include pictures and any distinctive marks in any appeals, and ask others to spread the word

There are some specific sites set up to help find lost and stolen dogs, like doglost.co.uk

Report your dog to the microchip database

Petitions supporting families with missing dogs and cats, please check the following links to see if you have signed. Thank you:-

Direct Line
Started in 1985, Direct Line became the first UK insurance company to use the telephone as its main channel of communication. It provides motor, home, travel and pet insurance cover direct to customers by phone or on-line.