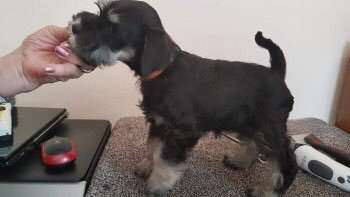 A dog owner has described her heartbreak after two eight-week old puppies were taken from her home.

Thieves broke into her home, on Molrams Lane in Great Baddow, between 7pm and 10pm.

They had searched through the house, pulling out draws in the bedrooms before leaving with a jewellery box and the puppies.

The black and silver dogs had not yet been named and were due to move into their new homes with their new families at the weekend.

“I’m heartbroken,” she said. “The people they were due to go to are heartbroken.

“I haven’t eaten properly, I cannot sleep as I’m so worried for them – I feel sick, really sick.”

Marjorie added: “I came back and there was no sign of a break-in, apparently they forced the door and then closed it again.

“I came in the dining room to feed the puppies and there was only two. I thought [initially] two got out, but there is no way they could have got out the pen.

“I went to check the other rooms. The two bedrooms were in such a mess, they ransacked them, then I knew obviously was a burglary.”

Marjorie’s own dogs were in the kitchen behind a curtain at the time of the theft.

The puppies, which are female, are both microchipped.

Marjorie praised Essex Police for their help and also spoke about how many people have come together to help.

She explained that a friend of hers has been calling all the vets in Essex and Hertfordshire to alert them in case the puppies arrive at their surgery, adding that someone she does not even know directly has been printing off posters and putting them up around Great Baddow.

Marjorie is urging anyone with any information to come forward, in order to help find the young puppies.

Investigating office PC John-James McGuirk said: “It is distressing for anyone to have their home broken into, but to have two young puppy dogs stolen is absolutely heartbreaking for the owner.

“These two little pups are just eight weeks old and they are a very distinctive breed.

“If you know where they are or who has them please contact us as soon as possible so we can reunite them with their distraught owner.”

Anyone with information about the burglary and the whereabouts of the puppies is asked to contact police at Chelmsford CID on 101 or Crimestoppers anonymously on 0800 555 111.