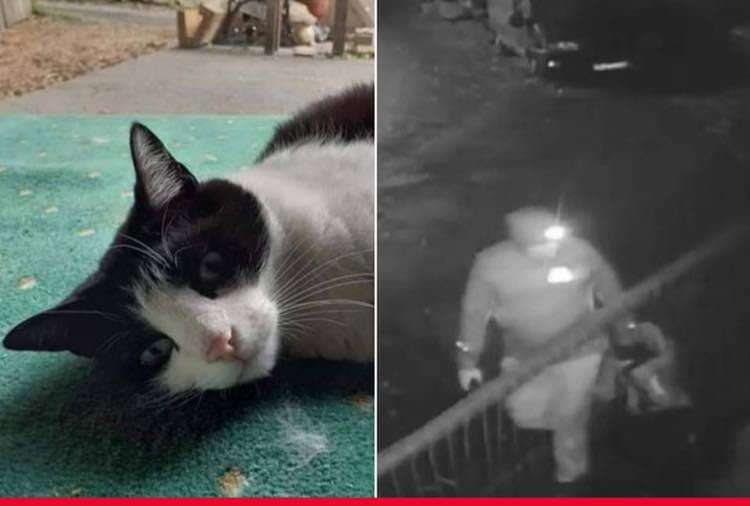 DO YOU RECOGNISE THIS CAT KILLER?

CCTV of beloved cat ‘thrown over bridge to die’ released by family to catch culprit.

A family cat described as a dad’s “best friend” was killed by a stranger who was caught on CCTV throwing the animal off a bridge then stuffing it in a rucksack in Heaton, Newcastle.

Sickening CCTV footage shows a man allegedly looking for a cat he later kicked, threw off a bridge, and killed in a shocking case of animal cruelty. In link below.

The black and white cat, called Toulouse belonged to 64-year-old Alex Greenwell and had been his close companion while he sheltered at his home in Heaton, Newcastle, due to the coronavirus pandemic.

In the clip, recorded on December 10 at around 6:30 pm, a man wearing a head torch appears in a residential street, apparently searching for something.

He stands right next to the fence on the edge of the property and holds his hands around his eyes as he peers through a gap.

Alex thought the man was a burglar and asked him what he was doing, Chronicle Live reports.

He replied “nothing”, but Alex later watched in horror as he allegedly saw the family cat being beaten, thrown off a bridge, and pushed into the man’s rucksack.

The footage shared by the family does not show the attack on Toulouse, which Alex’s son, Fraser, said had left his dad crying with grief.

“I’ve never seen him cry but when I went to the house that night he burst into tears straight away.

“He’s got a few medical conditions and has been shielding due to Covid, so the cat has literally been his best friend.”

Police have analysed the CCTV and believe the attacker’s coat may be Mountain Equipment brand, rather than North Face as originally thought.