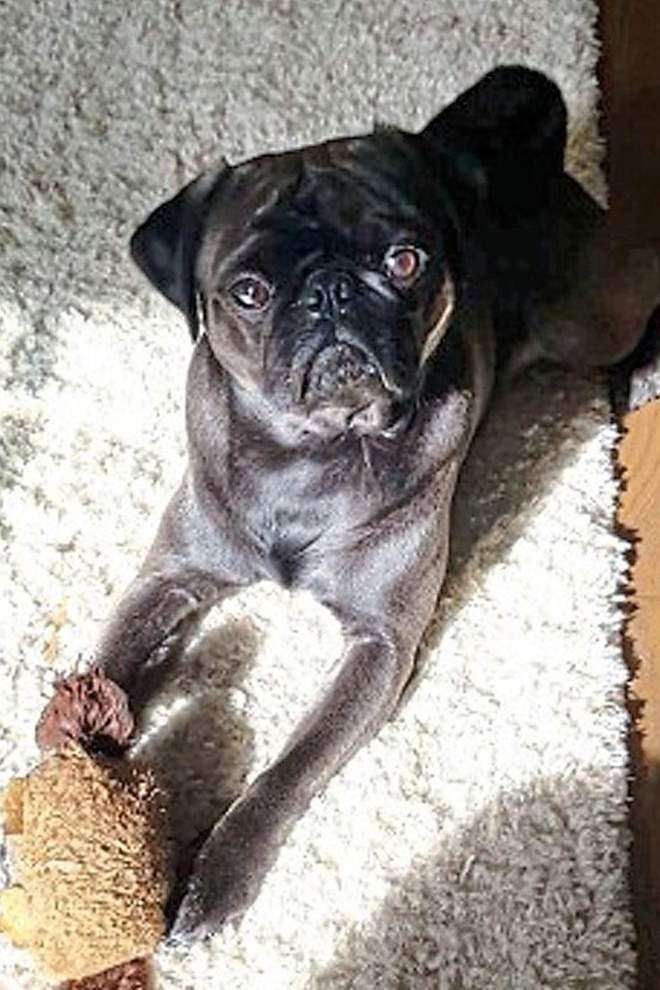 This is the moment a pair of dognappers untie a family’s treasured pedigree pug and calmly lead him away past shoppers on a busy street.

Pugsley was tied up alone outside a newsagents in Maida Vale for just a few minutes when two young men passing by spotted him and seized their opportunity. CCTV from West 9 Food and Wine in Harrow Road shows one backpack-carrying suspect walk off with the pup, while his accomplice smirks.

Pugsley’s owners Barbara Nicholson, 62, and her grandson Kane, 13, today called on Londoners for help to track down their “baby” who has now been missing for two weeks.

The Kennel Club-registered pedigree was bought from a breeder for £1,000 as a gift for Kane, who lives with his grandmother, when the boy was nine.

Ms Nicholson, who has lived in the area for more than 40 years, said: “My grandson is devastated. The whole of me is grieving, I’ve not slept a wink.

“I feel so awful. I cried more when I lost this dog than when my husband died — he is my baby. We tie him outside that shop every day, I go in and out. I just want him back. I keep waiting to hear his little nails clipping along the floor.”

Her daughter Betty Nicholson, 24, urged the dognappers to return the two-year-old pup. She said: “With our area everyone knows everyone, everyone knows our dog. You never expect something like that to happen here.”

It comes amid a reported rise in dog thefts in London from search organisation DogLost, which has assigned a caseworker to Pugsley.

A Metropolitan police spokesman said they were called to the incident at about 9pm on October 18. Inquiries are ongoing and no arrests have been made. Anyone with information should call 101 with reference CAD 7973/18Oct.

Watch the video on this link:- https://www.standard.co.uk/news/crime/caught-on-cctv-theft-of-1000-pug-from-outside-london-shop-a3976806.html

Share:
← Dover couple delay the sale of their house until their missing dog Albi is returned home. #PetTheftReform
Ross Thomson MP’s second reading of the Pet (Theft) Bill is on 25th January’19 #PetTheftReform →