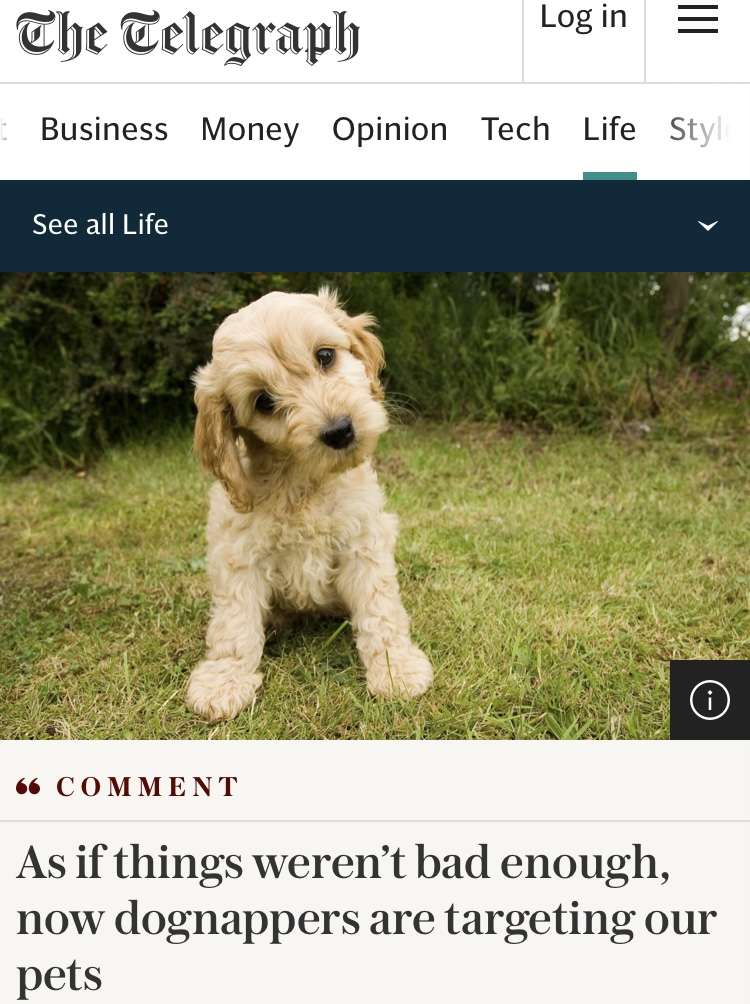 As if things weren’t bad enough, now dognappers are targeting our pets #PetTheftReform

Heartless thieves have taken the one pleasure lockdown afforded us and filled it with fear, all for the sake of making money. The Telegraph,14 January 2021. Hannah Betts

The average price of a puppy doubled during 2020

A new horror is stalking the nation’s streets: dognapping, lockdown having yielded what one politician refers to as the “worst time ever” for canine theft.

Criminals and opportunists alike are being spurred by a lockdown dog boom, in which animals can be traded for several thousand pounds per sale.

Most miscreants are hunting for trained dogs for new owners reluctant to go through laborious training; others seek out placid pets to be used as bait in dog fights. A friend who was recently aggressed by three would-be thieves in east London was informed by local police that walking her beagle in public was akin to flashing a Rolex.

Dognapping last reared its head in Victorian Britain, as it became common for dogs to be seen less as working animals, more as domestic pets. Poet Elizabeth Barrett Browning had her spaniel, Flush, kidnapped three times. Similar social factors applied. In 1845, a stolen hound could raise between £2 and £50. Today, with online competition flourishing, it can be £5,000 for pedigree pups or modish crosses.

According to Pets4Homes, the average price of a puppy doubled during 2020 to £1,912. The most costly breed was the cavapoo – a cavalier king charles spaniel (like Flush) and poodle mix. Some 1,882 people were bidding to buy each of the site’s cavapoo pups, the average price rising to £2,867; while the more energetic salukis, patterdale terriers and akitas were the only breeds available for less than £1,000.

Local papers abound with tales of owners punched in parks, back gardens targeted and swoops on breeders. The human – and canine cost – is immeasurable. And, yet, bizarrely, pet theft is not even a specific crime. Instead, under the Theft Act of 1968, animals are regarded as inanimate objects, akin to a stolen phone. Accordingly, not only is dog theft low risk, it is difficult to amass reliable figures for its occurrence, police forces varying in how they report it.

In October, Prof Daniel Allen, patron of the Stolen and Missing Pets Alliance (Sampa), brought the issue to the Commons, calling for this “nasty crime” to be made a specific offence. He says “nasty”; I say savage.

It is the subject of international parody that we Brits care more about our dogs than we do our children. Noël Coward famously linked mad dogs with Englishmen. However, he might just as easily have sung that the Englishman is mad about dogs – and the Scot, Irish and Welshman, for that matter. It is a passion that transcends the class system that can divide us: the retired miner as mad about his lurcher as the duchess who drags hers about Dorset.

Britain was the first country in the world to start a welfare charity for our furry friends. Take away a Brit’s dog and you pluck out their heart. All dogs are therapy animals, four-legged endorphin generators and securers of mental health. It’s not their purpose to keep us happy, but they do so, nonetheless. For there is something about a hound that makes the stiff upper lip tremble. They elicit open adoration one would never admit (or feel) for one’s fellow man; sentiment rendered not merely acceptable, but noble. The first two poems I committed to memory were about canine devotion: tear-jerking laments, seared deep into the brain.

Dogs’ ability to defeat our stoicism is even exhibited by our menfolk, not least the kind of establishment male packed off to school aged eight with a command not to cry. Compare Uncle Matthew in Nancy Mitford’s The Pursuit of Love, who had only ever read one book in his life, Jack London’s canine-narrated White Fang, declaring: “It’s so frightfully good I’ve never bothered to read another.”

Writer and sister to the PM, Rachel Johnson, has recalled sitting through a play in which various traumas were endured, until the death of a dog reduced her husband to “heaving sobs”. Historian Max Hastings, meanwhile, told Johnson that the piece he has written that caused the most reader reaction was “about whether to put down his labrador”.

The other day, I pleaded with my partner to come up with the recommended lies should anyone make suspicious inquiries about our beloved whippet; namely: “She’s a rescue, spayed, ancient and cancerous.” Not 24 hours later, while clad in lordly Barbour and green wellies, he loftily informed two menacing south London thugs precisely what she cost, while suggesting they head to Battersea for a stray. We were saved by their falling into a fight.

I now carry the kind of attack alarm I haven’t brandished since the Eighties. Dog thieves have taken the one pleasure lockdown afforded us and filled it with fear.