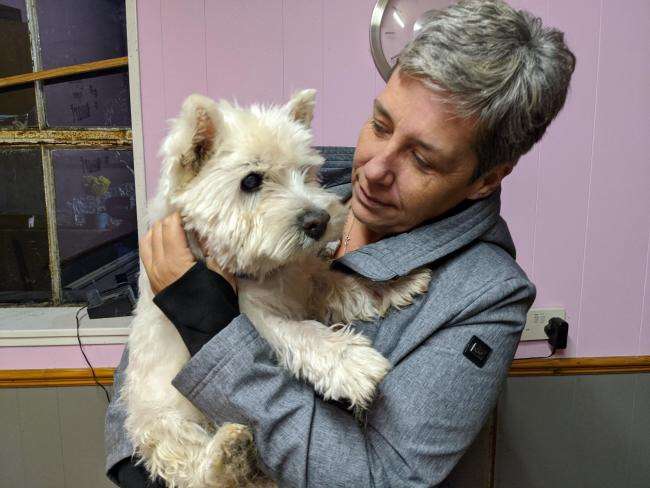 Little Razzi, a West Highland White Terrier, was found by a member of the public and handed into Irvine Police Station before being picked up by North Ayrshire Council’s Dog Warden Service on October 18.

As he was unchipped, he couldn’t be immediately returned to his owner.

So, the Council’s Dog Warden Service put out an appeal on their Facebook page which was shared hundreds of times to accounts across the UK.

Amazingly, as the message was shared to missing dog websites, Razzi was spotted by his owner, Lavina Barclay, who lives more than 250 miles away, in Doncaster, Yorkshire.

Her Westie had been stolen some three weeks earlier, but she knew it was Razzi as soon as she spotted the picture.

She immediately made the six-hour journey north to Ayrshire for an emotional reunion at Southfield Kennels, Mauchline, where Razzi had been staying since he was found.

Lavina doesn’t know for certain why Razzi was taken or why he would end up in Irvine. She added: “It’s a long way to take him, whoever took him.

“There are 10 grandchildren and they have missed him so it will be great to take him home.”

Councillor Alex Gallagher, Cabinet Member for Economy at North Ayrshire Council, said: “We were delighted to help get Razzi home to his family.

“His story was shared far and wide on social media and it’s fantastic to get such a happy ending.

“We would also like to encourage owners to double-check that their dog is chipped as it can make all the difference in getting your pet home if they are ever lost or stolen.”

Share:
← Merlin REUNITED: When your 6 year old is sobbing coz he just wants his dog back, and your 9 year old is just too devastated to talk, it’s killing me!!!
DEBATE IN PARLIAMENT DURING COVID LOCKDOWN: PET THEFT REFORM DEBATE ZOOMING INTO HISTORY →