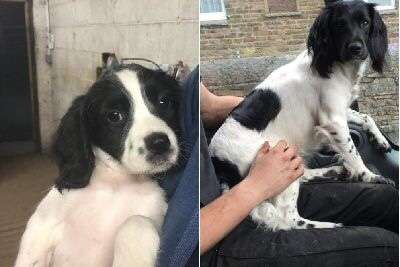 Black and white springer spaniels Daisy and Molly disappeared from an address in Wrightington almost 18 months ago.

The animals belonged to Niki Lace and her mother Sue and have never been traced, although a picture of one of them was posted on social media around a year ago.

hey spoke of the continuing heartache caused by the theft and alarmingly said they thought other dogs of the same breed had recently gone missing in the area too.

They also praised the group of animal lovers on Facebook who have never lost hope of finding Daisy and Molly and are trying to once more jog memories as it comes up to a year and a half since the day they were taken.

Niki said: “We were working on a new patio at my mum’s. The dogs were playing in the garden and then they just disappeared, even though it was enclosed and fenced off.

“It was very peculiar. Normally our dogs would have been with us at work but we were at my mums for about a week so it really felt like someone had been staking it out and then ca me back purposefully to take them.

“It’s very difficult, although you get over it and move on. My mum got cats because she couldn’t bear the idea of getting another dog. She’s on tenterhooks and panics about them going missing.

“I look at every black and white springer I ever see. Every time there’s something on social media about the mistreatment of dogs it’s absolutely heartbreaking.

“The Facebook groups are amazing. It’s so emotional and upsetting you can’t keep the momentum going but they have the energy and strength to do it. The number of people who help and message you is amazing.”

Molly was just a six-month-old puppy when she vanished, while Daisy was three. Both dogs were chipped and wearing collars and Niki described them both as “dead friendly”.

Niki says her biggest worry is for Molly, who was still too young to be spayed when she was taken on January 30, 2018.

Animal enthusiasts have set up a public group on social media specifically for sharing information about Daisy and Molly and for keeping the theft in the public eye.

Niki and Sue said they have also received generous support from Dogs Lost.