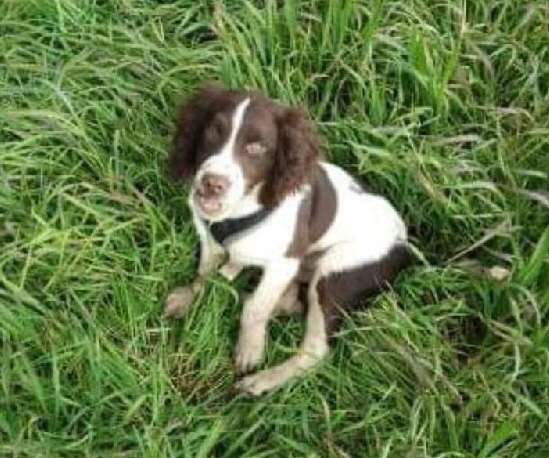 Great news George is home 🐾❤️🐾 Too Hot To Handle. You helped by sharing. Thank you.

A heartbroken Wigan family are pleading for the safe return of their beloved puppy after he was stolen from the back of their car.

George, a four-month-old Springer Spaniel, was snatched from the back of a vehicle in Warrington Road, Abram, Wigan, on Sunday morning (14th April, 2019), close to the former Dover Lock pub.

It was around 11.20am when owner Jake, and his brother, was walking George along with their other dogs in a field. Following the walk, they loaded George into the back of a Ford Ranger before heading back into the nearby field to round up the other pets.

When they returned to the vehicle just a few minutes later, however, they discovered that the beloved puppy was gone. The latches which open the back of the 4×4 had been unlocked, and someone had snatched George.

Jake’s partner Elise Havey said her two-year-old daughter had been left devastated after finding out her puppy had been taken.

She pleaded with whoever took George to give him back, saying: “There is a very upset little girl who is longing for her puppy back. Please just take him to a safe place so that he can be found and returned home where he belongs.”

George was wearing a black harness when he went missing, and is micro chipped. If found, he must be reported to the council’s dog warden, as required by law.

Anyone with information on George should call:-

or call Greater Manchester Police on 101

Petition to make pet Theft a criminal offence and put deterrents in place to protect our pets:- https://petition.parliament.uk/petitions/244530

Share:
← Stolen pug reunited after CCTV of thieves released. #PetTheftReform.
GSD puppy stolen from service station on M1, London. CCTV of man police would like to talk too. REUNITED #PetTheftReform →