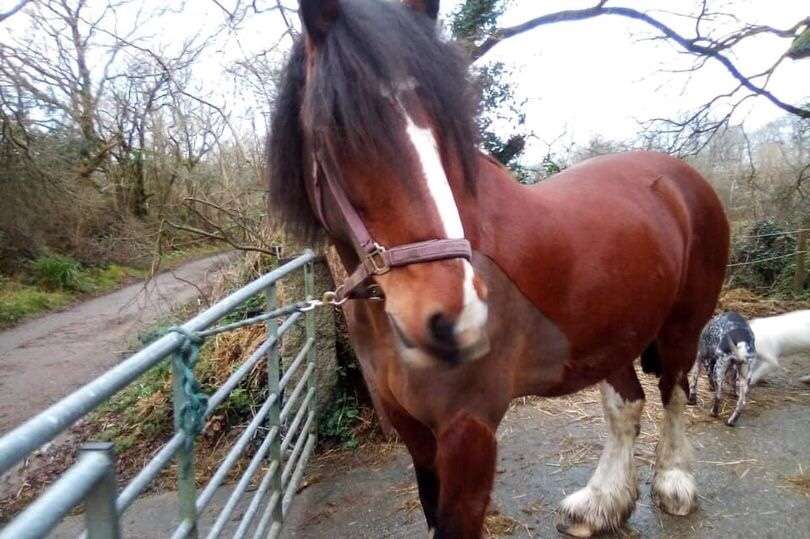 A horse owner has described the moment his heart sank after hearing the news his beloved mare had been stolen from his farm.

Shire mare Ellie was taken last night from Joe Hilton’s yard behind Bodmin College whilst he was out visiting a friend.

Eight year old Ellie’s tack was also taken and she has been described as having a distinctive rich coloured bay.

Female shire horses weigh around a tonne and Joe believes the thieves must have planned the break-in meticulously.

Joe said: “I’m in shock. I’ve been told by several people that this could happen but our place is fairly secure with one way in and one way out so I thought it’d be ok.

“I went out last night (Saturday) and stayed at a friend’s and this morning I got a call about 7am saying that someone had been in our farm yard.

“The stable doors had been opened and the mare had been taken out. There was another horse in there with her so they would have had to have kept him in while they took her out.

“They never went through the main gates. Whoever did this took her across two fields and out onto the road that way. They also broke into my father’s tack room but only took the tack relating to Ellie.”

Joe said that he suspects whoever committed the crime planned the act meticulously.

He added: “I think they had been watching. On Friday my truck was parked in the yard so they couldn’t get in but last night I took the truck to my friend’s and that’s when they struck.

“I felt sick when I found out what had happened and my stomach just dropped. My mother and father live on the farm too.

“She’s very unique looking so I just hope someone knows something so we can find who did this. She’s a shire mare and a breeding horse so very high in value.”

Ellie has been microchipped and the crime has since been reported to police .