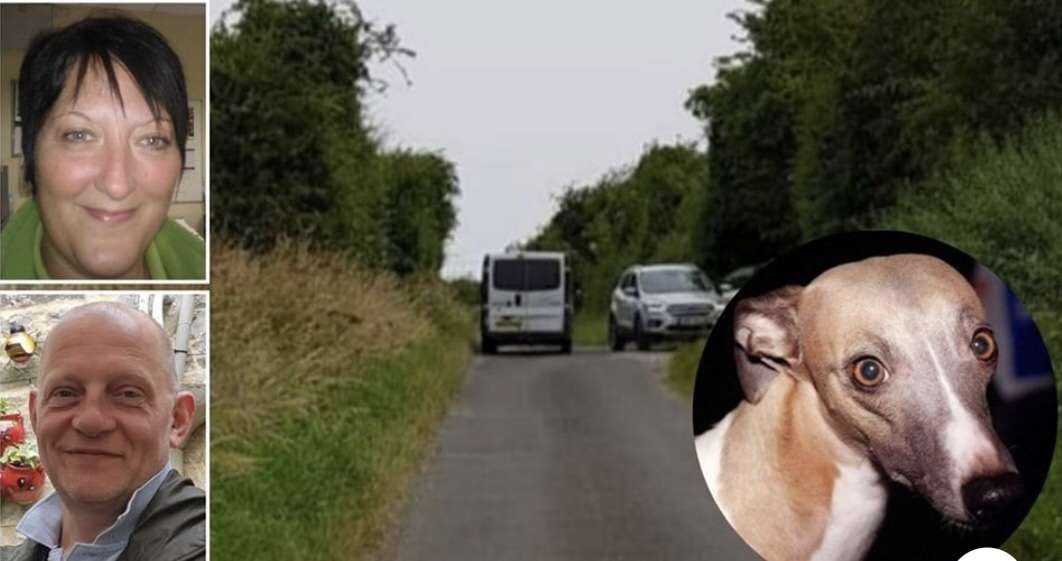 A married couple stopped an attempted dognapping after they witnessed two men with a van chasing a whippet down a country lane.

Darl and Victoria Hamlett were driving home in separate cars near Cirencester when they happened across the incident at 10.05am on Wednesday, July 17.

Mrs Hamlett was following behind on the Calmsden country road, Dark Lane, and grew curious when she saw her husband’s car stop beside a white transit van that was parked in the road along with other cars that had stopped.

She then saw a small “nervous” whippet running towards her, followed by two young men who she said were calling ‘c’mon Lucky!’.

According to Mrs Hamlett, the whippet was a young bitch that had white fur with brown patches.

Mrs Hamlett, 48, said: “The dog seemed really wary of the two men. I know if I called my dogs, they would come to me. It looked very nervous. It was the way the men were marching down the road, not listening to anybody or asking anyone for help getting the dog.”

The men had thick Liverpudlian accents, she said, were white, 6ft tall, of slim build and wearing dark clothes.

“She, the dog, was very nervous. She came to the door twice and put her paw in the door and I thought I was going to be able to secure her,” added the care assistant.

Mrs Hamlett went on to say that the men claimed that the bitch was theirs.

She went on to say that she could tell the whippet was wary as her “tail was clamped into its bottom and its ears were flat” – Mrs Hamlett said she could pick up on the signs as she used to be a deputy manager Pets At Home.

As the men approached her, she said: “I told them I didn’t believe it was their dog and that I was going to call the police.

“I had no signal though but I knew that they didn’t know that.

“As soon as I picked up the phone one of the guys who seemed more alpha than the other one carried on after the dog, but the other guy stopped and said ‘C’mon we’ve got to get to work leave it leave it, it’s not really his dog. We were just messing. C’mon we’ve got to go’.”

Mr Hamlett, a barber, rushed behind when he saw the men coming towards his wife, who was attempting to shield the bitch.

He said: “Eventually they backed down and said it wasn’t their dog, which I told them honestly wasn’t very funny.

“I’m not a very serious man, but I am when it comes to dog theft.”

The younger man out of the two then replied to him: “C’mon we’ve got to get to work.”

The two men then went back to their van, got in and drove past Mrs Hamlett’s car. The dog had run off in the same direction and the couple said that it looked like the men were going to run the dog over.

The 51-year-old whipped his phone out and started taking pictures.

Then the men got out and approached Mr Hamlett.

Mr Hamlett recounts: “They asked to see my phone.

“Totally honest, I swore at them.”

The barber was wearing glasses at the time.

He continued: “Then they started mouthing off and called me four eyes – which I thought was a bit lame. So, he got a bit worse back from me and then they got back in their car and headed off.

“That name – four eyes – it just showed the childishness of the situation really.”

Mr Hamlett said that if they were older men, then it would have been a more “threatening situation”. He also mentioned that there were other people around, concerned about the dog.

Fortunately, the couple saw the bitch running towards a nearby house. Mrs Hamlet went to the house and informed the shocked resident, the dog’s owner, about the situation.

The couple then went home, Mr Hamlett had to take one of his two sons to an optician’s appointment.

Gloucestershire Constabulary confirmed the events and released the following statement: “We received a report of an incident in Calmsden near Cirencester at around 10.05am this morning in which two men attempted to coax a whippet that didn’t belong to them into a van.

“The men are described as white, 6ft tall, of slim build, wearing dark clothes and with thick Liverpool accents. The van was a white Transit style model.

“The local policing team have been made aware and anyone with information is asked to call 101 and quote incident 258 of July 17.

“We would like to thank the members of the public who reported this incident and would ask anyone else who comes across suspicious activity like this to contact us at the earliest opportunity.

“In the meantime, we would urge dog owners to be vigilant.”

They said: “We are aware that dogs have become a more desirable item for thieves and in some cases ransoms running into thousands of pounds are demanded from owners for their safe return.

“We would always ask victims to call police and never recommend paying a ransom, although we understand how desperate people may become.

“If you witness a crime in progress we would advise you to call 999 at the earliest opportunity as it gives us the best chance of catching those responsible. In this case that wasn’t possible due to the lack of phone reception.

“We would like to thank the couple who reported this to us for their efforts to protect the dog but would urge people to be wary of confronting suspected criminals generally, as their reaction will be unpredictable and you could put yourself in danger.

“Owners should get their dogs microchipped by 8 weeks old. It greatly improves the chances of being reunited with your dog if it is taken or lost”