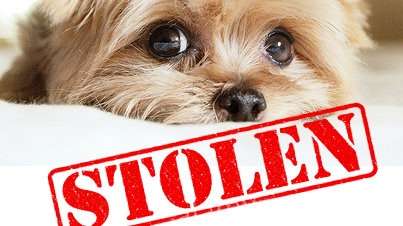 With some designer breeds fetching more than £1,000 dog theft is an increasing problem in Cambridgeshire

A small army of volunteers are on a mission to track down Cambridgeshire’s lost and stolen dogs.

Having your pet stolen is a dog lover’s worst nightmare, but not-for-profit organisation DogLost boasts an impressive track record in reuniting pooches with their owners.

Over the past 12 years it has provided free assistance to more than 70,000 owners nationwide and helped reunite nearly 55,000 dogs through various media appeals.

With some designer breeds fetching upwards of £1,000, they are increasingly becoming the target of thieves.

Sarah Price, 60, co-ordinator of DogLost’s Cambridgeshire branch, says the impact on families can be akin to losing a child.

She said: “There is a huge amount of dog theft in Cambridgeshire and it is increasing daily.

“Designer dogs are becoming more popular, like French bulldogs, everyone wants to have one.

“But pets are like members of the family, they can’t just be replaced.”

And much like a missing person campaign, local co-ordinators in each area go off and put up posters and conduct searches.

Sarah said: “Anyone who would steal a dog has got to be heartless. How can you take a member of someone’s family?

“It’s heartbreaking. Owners are totally panic stricken when they realise they have been stolen and someone has got them.

“Some families have children and they are constantly crying – it’s horrible.”

Part DogLost’s strength is the way in which the co-ordinate with other local groups and dog wardens.

These also include the police, rescue centres, animal welfare organisations and Petlog.

Together they have made ‘against the odds’ reunions possible, as staff from these organisations check dogs they have found or had surrendered to them against a database.

DogLost also works in partnership with Halo Scanners and any dog registered with DogLost will be automatically flagged up as missing wherever it is scanned with a Halo.

The News previously reported there has been a 125 per cent rise in thefts since 2015.

In 2017, 31 dogs were stolen in the county, three of which were Cockapoo puppies – although Staffordshire Bull Terriers and Staff cross-breeds remain the top dog of choice for thieves, with six stolen.

Two Chihuahua puppies are also among those dognapped last year.

The data shows where the dogs were stolen from and include homes, gardens, parks, streets, kennels and there was a failed attempt to steal a Saluki from an animal shelter.

In March a ‘massive warning’ message was put out on social media over a gang of suspected dog-nappers operating in Cambridgeshire.

Pet owners have been warned to look out for a white Nissan pick-up truck being followed by a white van. The vehicles are suspected of being involved in at least two dog thefts in Ely and the Huntingdon and St Neots area.

In February a man from St Neots feared someone was driving around on the lookout for high value dog breeds.

The man, who asked not to be named, claimed he spotted a suspicious-looking white van driver stopping to stare at dog walkers with expensive breeds in Monarch Road.

A police spokeswoman said: “Having your dog stolen can be extremely distressing. Simple measures like locking doors and keeping your property secure will help deter thieves. Never leave your pet tied-up unattended. Ensure your dog is microchipped and, when in a public place, is wearing a collar and ID tag.

“If you believe your dog has been stolen, check with family or friends who may have access to ensure they haven’t taken the dog out and then call police.

“If you have lost your dog, please contact the local dog warden.”

A change in the law

Currently the theft of a dog is a criminal offence, punishable with a maximum penalty of seven years imprisonment.

Now the Dog lost is lobbying to reclassify the theft of a pet so animals are treated as more than ‘property’ in the eyes of the law.

To do this they have joined with other groups to form the Stolen and Missing Pets Alliance, which is seeking tougher penalties for dognappers.

Its members are also form the Associate Parliamentary Group on Animal Welfare and the Microchipping Alliance.

Jayne Hayes set up the website to reunite missing pets with their owners after her own Miniature French Bulldog was stolen. Realising how little help was available for owners she set about providing help for others in the same position.

Today DogLost boasts more than 100 official area co-ordinators and volunteers who are supported by thousands of helpers. Countless owners who have got their dogs back after a mammoth effort say they only carried on using the strength they were given by DogLost volunteers.