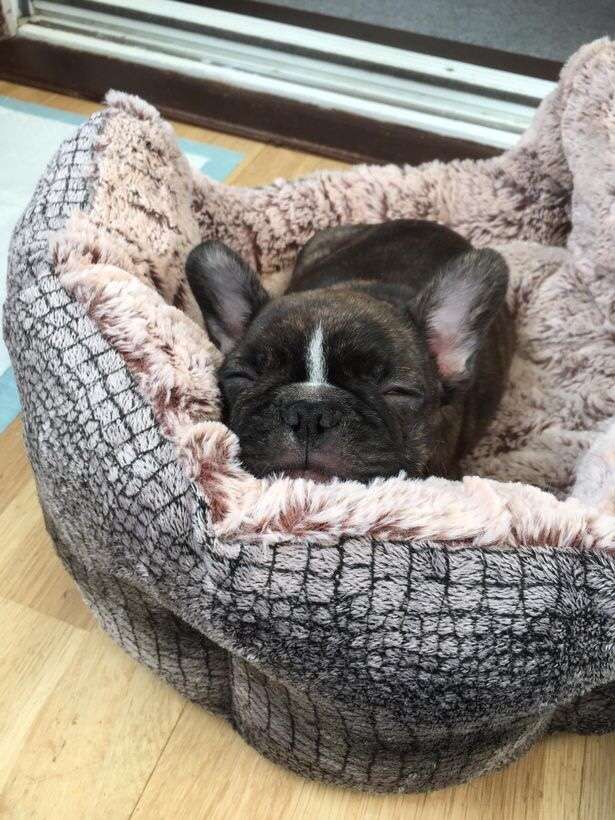 The owners of a “precious” puppy believed to have been stolen have appealed for her safe return.

French bulldog “BB” was left alone briefly in the front driveway of a home on Ludlow Crescent in Runcorn at around 9am on Friday when she is believed to have been stolen.

Owner Lydia Lawson and her family have now kick-started a publicity blitz in a bid to retrieve the beloved 10-week-old puppy.

Their efforts have now spread the word close to home, as well as around Liverpool, Manchester and St Helens.

BB’s disappearance added to the heartbreak of Lydia, 36, whose last dog died just a couple of months ago through illness.

Speaking today while Lydia is in work, her sister Hayley Lawson the family has ruled out escape as a possibility, and although brindle bitch BB is still very small, Hayley said there was no evidence of a bird of prey or fox taking her.

BB vanished from Lydia’s parents’ house during a busy time of day when school runs were under way for both the nearby Heath secondary and Pewithall primary schools.

The puppy was bought for £2,500 from a Liverpool breeder and with more than one Crufts winner in BB’s bloodline, Hayley said the premium pup could be worth far more now if she becomes a show dog.

Lydia estimates she could be worth around £10,000.

BB, which is short for “Bourbon Biscuit”, has a distinct white stripe above her nose and white on her underside.

She is also microchipped.

After the pup’s disappearance, the whole family has rallied round, contacting dogs homes and the Dog Lost volunteer group as well as putting up posters in an effort to make her “too hot to handle”.

Hayley said: “She’s absolutely devastated. We all are to be honest, and my parents are, they’re feeling so guilty, the puppy was in their care.

“It’s just not a nice thing. People don’t understand it when they’re not dog lovers.

“It can be hard for people to understand.

“She (Lydia) had to have a Staffie put to sleep a couple of months ago, she was so poorly.

“She’s got that and then this has happened. They’re just so precious.”

She added: “She was on the driveway – they’ve got big gates.

“He (their dad) literally went in, made a cup of tea, went outside and she’d gone.

“We informed the warden and vets then we started on social media, we got involved with the DogLost organisation, they’ve been amazing.”